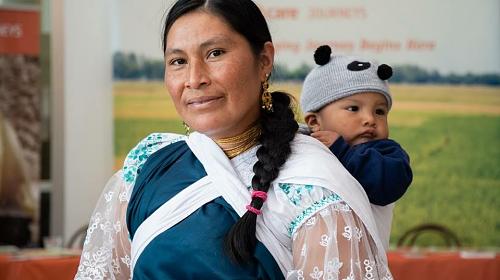 Alicia Lanchimba, a domestic worker from Ecuador, joined attendees at the CARE National Conference in Washington, D.C., where she presented more than 70,000 signatures from across the U.S., calling on protections against sexual abuse in the workplace. She is part of a domestic workers group pushing for freedom from violence at work. CREDIT: Carey Wagner/CARE

WASHINGTON, D.C. (May 22, 2018) — Advocates with the global poverty-fighting organization CARE today delivered a petition to U.S. delegates to the International Labour Conference (ILC)  calling for a global treaty protecting women and men against sexual harassment and abuse in the workplace. The petition, signed by more than 70,000 people in the United States, is part of the #ThisIsNotWorking campaign that has garnered more than 100,000 signatures globally – from France and the UK to Australia and Ecuador – in advance of the ILC that begins next week in Geneva. There, government leaders from around the world will decide whether to create the landmark legal framework making clear that working free from violence is as fundamental as the right to bathroom breaks and overtime pay.

More than a third of the world’s countries have no laws against workplace sexual abuse or harassment, leaving nearly 235 million women vulnerable on the job. And even in countries that do, lax enforcement and pronounced power imbalances between men and women have allowed a global epidemic of workplace harassment to persist.

“The real promise of the #MeToo movement isn’t in bringing down dozens of powerful men in the United States but rather in lifting up millions of women around the world,” said Michelle Nunn, CARE president and CEO. “Gender-based violence is a cause and consequence of poverty and gender inequality. Yet it remains a hidden, even taboo, issue in many countries. We need to change that, and the ILC framework is a solid step to doing just that, bringing the issue into focus for legal and community redress in countries around the world.”

On hand in Washington to present the U.S. petition, boxed in a symbolic CARE Package®, was Alicia Lanchimba, a maid from Ecuador who, having endured harassment and abuse from past employers, is now speaking out against it. She is part of a domestic workers group pushing for freedom from violence in the workplace. “It is good to talk about our experiences,” she said. “It is good to release our pain. That’s what makes us stronger.”

Joining her on stage before hundreds of CARE advocates was CARE Egypt’s Iman El-Mahdi, who runs a program that has turned tuk-tuk taxi drivers, once notorious for harassing female customers on the streets of Cairo, into champions for women. Also presenting was CARE advocate Hannah Sweeney from Traverse City, Mich., one of 300,000 citizen advocates across the U.S. who raise their own voices on behalf of the world’s most vulnerable women and girls as part of the CARE Action Network.

The names of those who signed the petition scrolled on a screen in the background as the trio of activists delivered the petition to Catherine Feingold, of the AFL-CIO, who has been a leader of the workers’ movement and was delighted to know there were so many supporters of the proposed convention, and Gabriella Rigg Herzog, of the United States Council for International Business (USCIB). The USCIB represents the employers, who have not yet declared a position on the instrument needed, but feel strongly about the importance of the topic. The AFL-CIO and USCIB are two parts of a three-body delegation. The third body from the U.S. government, anchored by the Department of Labor, was not able to send its representative.

The petition drive is part of CARE’s global social media campaign called #ThisIsNotWorking, which launched on International Women’s Day, March 8, and has reached millions of people on Facebook, Twitter and Instagram, garnering 3.2 million video views and 29,000 shares. The campaign features Lanchimba’s story and those of other inspiring women around the world advocating for change in their communities.

Lanchimba is among those breaking the secrecy and silence around sexual abuse and harassment in the workplace as the #MeToo and #TimesUp movements shine a bright light on the issue. In fact, a recent Harris Poll commissioned by CARE found that 65% of women across eight countries – Australia, Ecuador, Egypt, India, South Africa, the United Kingdom, the U.S. and Vietnam – are expecting #MeToo to have a positive impact on workplace behavior in their own countries.

Establishing a legal framework is the first step toward building accountability on this issue globally. CARE supports a meaningful ILC, which sets policy for the International Labor Organization (ILO) and hopes it will protect women workers around the world, from maids in Latin America to factory workers in places like Cambodia and Vietnam to agricultural workers across Africa.

This week CARE leaders and advocates have been presenting petition signatures to government officials. In the United Kingdom, CARE presented a petition Monday to the Department for Work and Pensions. CARE also launched a regional online petition calling on the governments of Ecuador, Guatemala and Honduras to support the ILO legislation to end workplace violence. Expressed through video testimonials of domestic workers across Ecuador, the social media campaign has yielded nearly 2,000 signatures and CARE has been invited to meet with Lenin Moreno, the President of Ecuador, to talk further about the issue.

Founded in 1945 with the creation of the CARE Package®, CARE is a leading humanitarian organization fighting global poverty. CARE places special focus on working alongside women and girls because, equipped with the proper resources, they have the power to lift whole families and entire communities out of poverty. That’s why women and girls are at the heart of CARE’s community-based efforts to improve education and health, create economic opportunity, respond to emergencies and confront hunger. Last year CARE worked in 93 countries and reached 63 million people. Learn more at care.org.