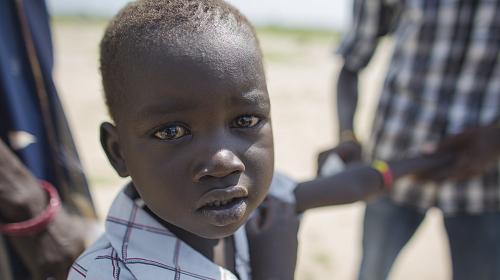 Richard Reath measures a child’s arm for signs of malnourishment. He says, “More children come here and we measure their arms to check whether they are malnourished. For several weeks now, a lot of children show ‘red’ or yellow on the scale. This means th

Severity of crisis depends on the delivery of humanitarian assistance, particularly in conflict-affected states.

JUBA, South Sudan (Feb. 2, 2015) — As many as 2.5 million South Sudanese will be living in severe hunger in the next three months, according to figures released today by the Integrated Phase Classification (IPC), the key tool for monitoring the status of the food crisis in South Sudan.

The IPC predicts nutrition will remain critical, with as much as 80 percent of the population in some parts of the country unable to cultivate crops.

The efforts of humanitarian organizations such as CARE combined with the resilience of the South Sudanese, averted serious hunger in 2014. But with little harvest and depleted food stocks in some parts of South Sudan, the country is now more vulnerable to food crisis. Much will depend on the delivery of planned humanitarian interventions, particularly in the conflict-affected states of Jonglei and Unity.

“If communities in these states are further isolated by fighting, the results could be catastrophic,” said Aimee Ansari, CARE’s country director in South Sudan. “CARE is doing all it can to help these communities but what South Sudan desperately needs is peace.”

“We welcome the recent ceasefire, and look forward to a comprehensive settlement at the next round of peace talks later this month so people can finally start rebuilding their lives,” Ansari said. “The human suffering – the destruction, the hunger and disease – has been horrendous but it also has significant longer term impacts. The recent Cost of War report predicts the affects of hunger on labor productivity adds up to billions of lost GDP the longer the conflict lasts.”

A recent assessment of Jonglei’s Duk County carried out by CARE estimated local food stocks to last until the start of February. “People are beginning to use a variety of coping mechanisms in a bid to stave off hunger,” said Mr. Mujahid Hussain, CARE’s state coordinator for Jonglei. “They’re selling what few assets they have to buy food. In some communities people are resorting to traditional food sources – eating water lilies or wild fruits, or surviving on wild animals.

Since the outbreak of violence in December 2013, an estimated 1.5 million people have been displaced from their homes and communities, and an estimated 450,000 people have crossed into neighbouring Ethiopia, Kenya, Sudan and Uganda in search of food and to escape violence. CARE is providing emergency water, sanitation, hygiene services and education, in addition to nutrition and livelihoods assistance. CARE also supports over 40 health facilities in Unity and Upper Nile states, two of the states most heavily affected by fighting.

CARE has been operating in Southern Sudan since 1993, initially providing humanitarian relief to internally displaced people in Western Equatoria. The signing of the Comprehensive Peace Agreement in 2005 allowed CARE to expand into Jonglei and Upper Nile States to support returnees from the refugee camps, and the organization has since broadened its operations to include development programs.

Putting Evaluations Into Practice: 20 Years of Food For Peace

This 34 page brief shows us lessons learned from 20 years of Food For Peace Programming.

Findings from the CARE Learning Tour to Djibouti and Mozambique. From August 17-23, 2015, a delegation of U.S. Senate Agriculture Committee staffers, the Administrator from the U.S. Department of Agriculture and a technical expert from Global Child Nutrition Foundation, traveled to Djibouti and Mozambique to see how U.S. investments in food and nutrition security are providing short-term food assistance to those in need, while also building the capacity of smallholder farmers to sustainably produce enough nutritious food to feed their families and lift their communities out of poverty.

A Recipe for Alleviating Chronic Malnutrition in Mozambique

Findings from the CARE Chefs’ Learning Tour to Mozambique

This 70 page report documents the findings of the SHOUHARDO II program, a Food For Peace program in Bangladesh that aims to reduce...

GRAD: Graduating Out of Social Assistance And Into Long-Term Food Security

GRAD is a five-year USAID-funded project designed to build on the Government of Ethiopia’s Productive Safety Net Program Plus (PSNP)...

This 8 page guide lays out the steps of how to use CARE's Participatory Performance Tracker.

This 2 page guide describes CARE's Participatory Performance Tracker tool, and outlines when it is useful.

CARE is committed to both food security and climate change adaptation as programming and policy advocacy priorities.