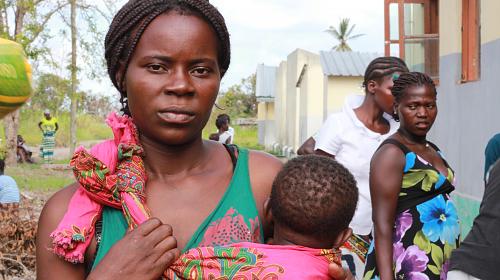 Linda Bene Lewane, 29, has been eating just one meal a day since the cyclone hit. On April 10, the mother of three children went to one of CARE’s last food distributions in the region even though she was not registered on the distribution list. “I am here to support my neighbors. They can’t carry the food to their homes by themselves. I hope they will have a heart for me and my children and share with us. It has been too many nights going to bed with an empty stomach.” Credit: Ninja Taprogge/CARE

Cyclone Idai caused devastation across Mozambique, Malawi and Zimbabwe last month, killing more than 1,000 people and leaving another 3 million in desperate need of help. The situation is particularly alarming in Mozambique where hundreds of thousands of people live in temporary shelters as their homes have been destroyed.

“There are severe risks for around 650,000 menstruating women and girls whose hygiene is threatened by unsafe water and a cholera outbreak,” explained Marc Nosbach, CARE’s country director in Mozambique. “While collecting water and preparing food for their families, women are even more exposed to the danger of contracting waterborne diseases.”

Women and young girls have “no other option than washing their menstrual cloths in receding and most certainly contaminated flood water,” Nosbach said. They have “no space to dry their laundry and therefore being forced to put on clammy clothes is adding even more risks for their health.”

In recent days, the government of Mozambique reported an increase of registered cholera cases from 1,000 to more than 4,000, with seven people who already lost their lives.

CARE is working with other NGOs as well as the Mozambique Ministry of Health to set up treatment centers and clinics. CARE is also helping to run a massive vaccination campaign.

“In addition to cholera, the extensive damage to health infrastructure and medical supplies still requires considerable effort to restore the functioning of the health system and ensure that people are able to receive basic, maternal and child care or for chronic diseases such as HIV and tuberculosis,” Nosbach said.

In Malawi, issues of women’s health are also in the spotlight.

“In the current crisis, most women have lost their livelihoods and report being at risk of sexual violence and exploitation, particularly women from single-headed families and girls,” Mwangitama Chavula, CARE’s maternal child health and nutrition coordinator said. “The risks they are experiencing include being harassed when travelling outside their communities to fetch firewood, water and food, and lack of washrooms,” he said, adding there is no bathing, washing and drying spaces for women in most camps.

CARE is supporting women with hygiene kits that include soaps, sanitary pads, water buckets and other items.  “However, the needs here are immense and so sexual and reproductive health needs, including access to family planning services are still unmet particularly for women,” Chavula said.

Additionally, with the scarcity of food, girls and women, particularly pregnant and lactating mothers, are also telling CARE that they are experiencing less access to nutritional food.

“Some women and girls say they have resolved for self-discrimination especially during the times that they are menstruating because having not bathed, they produce bad bodily odor thus having specific needs including clothing, sanitary pads and undergarments for menstrual hygiene and dignity.”

CARE staff in Zimbabwe warn that the lack of adequate water and sanitation infrastructure in the affected communities poses a health disaster in the camps where displaced communities are living.

“We are particularly addressing the issue of the lack of segregation of latrines by gender, as well as the lack of bathing facilities,” explained Abel Whande” CARE’s emergency coordinator. “Women’s menstrual hygiene needs are largely unmet, though CARE has distributed dignity kits.”

About CARE
Founded in 1945 with the creation of the CARE Package®, CARE is a leading humanitarian organization fighting global poverty. CARE places special focus on working alongside women and girls because, equipped with the proper resources, they have the power to lift whole families and entire communities out of poverty. That’s why women and girls are at the heart of CARE’s community-based efforts to impArove education and health, create economic opportunity, respond to emergencies and confront hunger. Last year CARE worked in 93 countries and reached more than 63 million people around the world. Learn more at care.org.

Stories from women on the frontlines of refugee response in Jordan. From Ahed Shishani: “Miss! I’m the pregnant woman you helped on that...

This 11 page article uses evidence from CARE's SAFPAC Project to prove that extending access to a wide variety of contraceptive methods...

One Year After Typhoon Haiyan

From Emergency Aid to "Build Back Safer"

Sexual and reproductive health is a significant public health need in all communities, including those facing emergencies.

Gender Is Easy: A Guideline for Doing a Gender Analysis in Emergencies