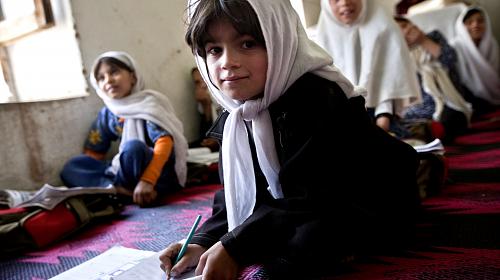 As Girl Summit commences in London, CARE details plan to turn tide against child marriage in parts of Nepal and Bangladesh, help communities reach a “Tipping Point” of lasting change

LONDON — The world can end child marriage in a generation, according to CARE experts addressing the Girl Summit in London today, but only if those vowing to stop the practice truly tackle the underlying forces driving girls and boys into child marriage across the globe.

Enacting policies to prevent child marriage and developing programs to educate and empower girls are critical steps, said Doris Bartel, a Girl Summit delegate and CARE’s director of gender and empowerment. But they’re far from enough. “Real progress requires deep changes from within entire families and communities, from parents and in-laws to religious leaders and business owners,” Bartel said. “Only then will the forces giving young girls greater choices win out over those pushing them into early marriage.”

Co-sponsored by UNICEF and the UK government, the Girl Summit is designed to draw firm commitments from a wide movement — faith leaders and development organizations to national governments and community groups — to end child marriage. Nearly 39,000 girls become child brides every day. That’s about one every 2 seconds and enough girl brides to fill Fenway Park, where the Boston Red Sox play — every single day. “That is a staggering, unacceptable number,” said Helene D. Gayle, president and CEO of CARE USA. “Child marriage doesn’t just rob young girls and boys of their childhood — it undermines future progress in health, education and development for entire nations. It’s time to take real, tangible steps to address the root causes of child marriage so children can thrive and reach their true potential.”

CARE’s delegation has signed the Girl Summit charter and pledged, through its Tipping Point initiative, to help communities in parts of Bangladesh and Nepal reverse the tide against child marriage. With a US $6.6 million investment over the next three years, CARE will advocate against child marriage globally and strike at the roots of the problem in 90 villages of northeastern Bangladesh — where 66 percent of girls marry before they are 18 — and 16 subdistricts of southern Nepal — where 41 percent of girls become child brides.

At the summit, CARE is urging governments and donors to intensify their own efforts to cut at the roots of child marriage by promoting secondary school education for girls, access to safe reproductive health services for adolescents and economic opportunities for teenage girls. CARE also is calling for: greater efforts to empower already-married girls who are often invisible in society; national strategies that make governments accountable for reducing child marriage; and increased support for community-led initiatives that transform social norms underpinning the practice.

Engaging men and boys is particularly critical to shifting those social norms, said Sabitra Dhakal, who heads up the Tipping Point in Nepal. “The father who makes most family decisions, the married boy who brings a wife to his house after wedding and the male religious leader who creates pressure to uphold traditional thinking — all are key to shifting gender dynamics in these communities.” At the summit, Dhakal also is providing a snapshot of an oft-overlooked aspect of child marriage: child grooms. In many cases they too lack choices about whom to marry and are forced to drop out of school.

The Tipping Point builds on CARE’s experience addressing child marriage in more than a dozen countries. From the Middle East and South Asia to sub-Saharan Africa, CARE helps communities generate their own solutions. In Ethiopia, where CARE helped adolescent brides through improvement in education, health, business and financial literacy, attitudes about girls began to change and communities stopped at least 180 child marriages. Another innovative project in Nepal delayed the marriage of 220 girls by providing them with educational support and obtaining their parents’ guarantee that the girls would finish high school. The program also engaged the media, religious leaders and law enforcement to change perceptions about the practice, even securing a commitment from caterers that they would refuse their services for child marriage ceremonies.

Tackling the Taboo highlights gender-transformative programs from organizations working at the intersection of child marriage and...

As Girl Summit commences in London, CARE details plan to turn tide against child marriage in parts of Nepal and Bangladesh, help communities reach a “Tipping Point” of lasting change LONDON — The world can end child marriage in a generation, according to CARE experts addressing the Girl Summit in London today, but only if those vowing

As Girl Summit commences in London, CARE details plan to turn tide against child marriage in parts of Nepal and Bangladesh, help communities reach a “Tipping Point” of lasting change LONDON — The world can end child marriage in a generation, according to CARE experts addressing the Girl Summit in London today, but only if those vowing

Findings from CARE’s Tipping Point Project Community Participatory Analysis Study, which was designed to deepen understanding of the contextual factors and root causes driving the prevalence of child marriage in particular regions of Nepal and Bangladesh, countries with some of the highest rates of child marriage in the world.

Child, Early and Forced Marriage and the Control of Sexuality and Reproduction

The goal of the Chunauti (which means “challenge” in Nepali) project, which was supported by USAID and implemented by CARE, was to...

4 page brief that describes CARE's child marriage prevention programming in Bangladesh and Nepal, including our focus on underlying...

CI position on Child Marriage for the Girl Summit

CARE's policy recommendations to global governments and civil society organizations on how to end child marriage, prepared for the 2014...

Married adolescents who were in TESFA took photos to show us what changed in their lives.  Take a look and see this program through...

Digging Up the Roots to Replant the Future. This one page fact sheet shows key statistics about child marriage globally, and in...

The Tipping Point initiative is addressing child marriage through a dynamic process of innovation, insight (analysis and learning), and...

Poverty is one of the reasons families give their daughters to be married at an early age. I was almost one of those child brides.

Child Marriage: A Promise of Poverty

Not every marriage lasts forever, but early marriage has lifelong consequences for girls.

“Maybe Someday, But Not Today”

Child Marriage: A Promise of Poverty

Not every marriage lasts forever, but early marriage has lifelong consequences for girls.