CARE Sympathizes with All Those Devastated by Hurricane Sandy - CARE

CARE Offers Sympathy to All Those Devastated by Hurricane Sandy 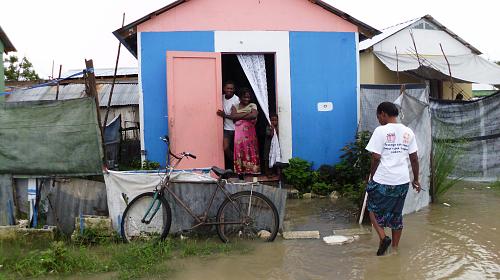 ATLANTA (October 30, 2012) – The international humanitarian and relief organization CARE offers its deepest sympathy to everyone affected by Hurricane Sandy, a deadly storm that has brought shared misery to the United States and the Caribbean.

CARE’s international emergency response teams are on the ground in Haiti, where damage caused by Sandy’s three days of continuous heavy rains have already left 52 people dead. Worst-affected are low-lying communities in western Haiti still recovering from damage caused by Tropical Storm Isaac in August. In Grand Anse province, Sandy destroyed and damaged 2,955 homes, decimated half of the cropland and left 14 people dead. In Léogâne, two villages were destroyed by the flooding caused by the storm, leaving more than 300 families without homes or belongings. In addition, large areas of farmland have been inundated, destroying much-needed local crops.

CARE’s emergency responders are focused first on delivering emergency clean water and hygiene supplies to the worst-affected communities in Grand Anse. Responding as quickly as possible is essential to halting the spread of deadly waterborne diseases like cholera. Some 30 cases of cholera have already been reported in Grand Anse alone, with more than 300 reported cases across the country and six deaths.

“From Haiti and the Caribbean to the northeastern United States, the breadth of the damage caused by Sandy is unlike anything most of us have ever seen,” says Jean-Michel Vigreaux, CARE’s country director in Haiti. “We’re hopeful that people in communities that were not affected by the storm will do what they can to support relief efforts in the worst-hit areas.”

To learn more about how CARE is responding to Sandy and to support our emergency relief efforts, please visit www.care.org or visit our blog at we.care.org.