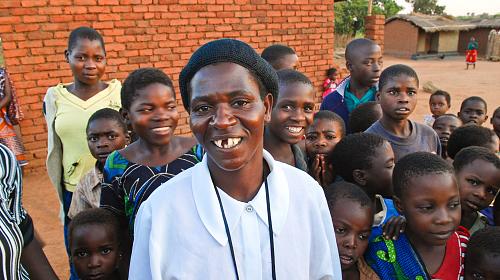 ATLANTA  — A savings-led microfinance program pioneered by the humanitarian organization CARE in Africa has surpassed an important milestone — 4 million members — and is highlighted in a book about the science of giving released this week by Pulitzer Prize-winners Nicholas Kristof and Sheryl WuDunn.

The more than 4 million people participating in CARE village savings and loan associations, or VSLAs, are now spread across 26 countries in sub-Saharan Africa. CARE launched the first VSLA in Niger in 1991 to safely provide basic financial services for people who lack access to traditional banking services such as interest-bearing savings accounts or business loans. VSLA members deposit their savings in a group lockbox at weekly meetings ­— sometimes as little as 10 cents ­— and earn interest on loans to group members who take out money to start businesses, improve their farms or make other investments in their futures.

They include Biti Rose Nasoni, whose rise out of poverty is detailed in Kristof and WuDunn’s new book A Path Appears: Transforming Lives, Creating Opportunities, which provides a roadmap for global citizens wishing to make a better world.

Kristof met Biti Rose in 2012 when visiting a CARE VSLA in Malawi. Biti Rose and her husband Alfred Nasoni have a 2.5 acre farm plot, but it often sat fallow because they didn’t have money for seeds. Biti Rose joined a CARE VSLA in 2005, when she and Alfred were so poor they had to pull their son out of school because they couldn’t afford the $5 uniform fee. Saving just pennies a week alongside 20 of her neighbors, Biti Rose eventually secured a $2 loan from the group to buy ingredients to sell a local variety of doughnut for just 2 cents each. Her doughnuts were immediately popular and Biti Rose started earning several dollars each day in profit – more money than she’d ever had in her life. Biti Rose and her husband have reinvested their profits in their children’s educations as well as their farm.

“I couldn’t even begin to count how many people like Biti Rose I’ve had the joy of meeting,” says Lauren Hendricks, executive director of CARE’s VSLA program, called Access Africa. “The reason this program keeps growing so fast is because, rather than impose a solution from the outside or bring in outside creditors, it helps focus the drive, hope and ingenuity that already exists within people. People like Biti Rose.”

The holiday and birthday gift list in A Path Appears includes a $25 gift to supply a CARE village and savings loan group with a lock box, ledger and other start-up tools. Each VSLA group takes it from there. As savings accrue, the groups loan money to their own members to start small businesses, buy seeds or fertilizer for planting, or pay household expenses. Loans are repaid with interest, which is passed on to group members as earned interest on their deposits.

More than 70 percent of VSLA members are women, giving them access to the kind of financial services often not available to them by other means. CARE does not give money to the groups or its members. Instead we offer the financial literacy and management training that empowers groups and their members to become self-supporting managers of their money. CARE has recently begun working with commercial banks, so that successful VSLA members can use the financial skills and assets they have gained to open accounts and join the formal financial sector.

Launched in 2018, the VSLA Scaling strategy is a bold initiative to scale CARE’s VSLAs to reach 50 Million women and girls by 2030.

She Feeds the World

This 28 page report describes the Livelihoods for Resilience strategy for building resilience of its 97,900 targeted households. It...

Want to get to empower women?

This 2 page brief highlights how CARE's GRAD program in Ethiopia is expanding on the concept of a traditional VSLA to improve impact.

This 30 page report examines barriers to including the poorest people in value chains, and lays out recommendations for how NGOs,...

This 12 page summary provides selected highlights from some of CARE's ongoing food and nutrition security work.

Banking on Change: Breaking the Barriers to Financial Inclusion

Connecting the World’s Poorest People to the Global Economy

The importance of expanding access to financial services for the world’s poorest people is increasingly recognized.

Currently, CARE is implementing over 74 economic development programs in 66 countries.

CARE’s programs in Economic Development work to improve the economic security and income opportunities of the poor.

The Neighborhoods Improvement Project works to build a base for reconstruction and recovery founded on social links and local capacity...

Since 2002, CARE Brasil has been contributing to processes of change in the Costa do Cacau (Cocoa Coast) region, Bahia’s south coast.