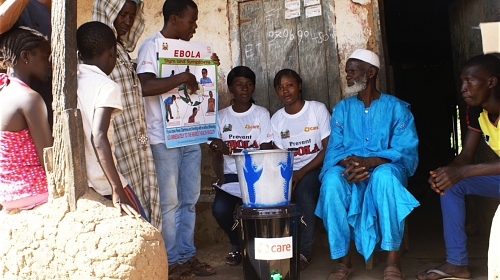 ATLANTA  —  To help stop the spread of the deadly Ebola virus in West Africa, the global humanitarian organization CARE is greatly limiting the group meetings that are core to its microfinance, health and sustainable agriculture work in Sierra Leone and Liberia. The restrictions, while necessary, only add to the concern from CARE staff on the ground who say the outbreak is exacting a steep economic, health and emotional toll that will be felt for a long time.

The current Ebola outbreak is, by far, the deadliest-ever outbreak of this rare, severe and usually fatal hemorrhagic fever. According to the Centers for Disease Control, 1,013 people have died as of August 12 — all but three of them in Liberia, Sierra Leone and Guinea.

“It is vital to focus attention and resources on stopping the spread of the virus and helping those who have contracted it. It is also very important to remember they’re not the only ones affected.” says Dr. Helene D. Gayle, president and CEO of CARE. “This outbreak will have a lasting impact on the social and economic well-being of some of the world’s poorest communities.”

CARE’s staff in Sierra Leone and Liberia report that necessary emergency limits on movement and public gatherings enacted to stop the spread of Ebola are putting a strain on people who, even prior to this outbreak, were struggling to earn a living and keep their families fed and healthy.

In rural Sierra Leone, where subsistence rice farmers typically work in one another’s rice fields during the growing season, limits on town-to-town travel mean that some rice fields will not be properly tended in the weeks leading up to September’s harvest, said Alfred Makavore, CARE’s technical coordinator for health in the country. No official estimates are available, but Makavore is concerned that a diminished harvest will lead to increased hunger in communities that already suffer high rates of malnutrition. “Bans on public gatherings have already forced the closure of weekly markets,” Makavore said. “This is where poor farmers from remote areas would typically gather to buy and sell goods. So we see Ebola claiming not only precious lives but also the livelihoods of people who can least afford it.”

CARE and its partners are temporarily unable to conduct programs like farmer field schools, HIV/AIDS education or health support meetings for pregnant and lactating women. In Liberia, CARE village savings and loan associations are forbidden from meeting, cutting participants off from a vital source of financial resources.

CARE has used its relationships in communities across Sierra Leone and Liberia to help educate the public on reducing transmission risk through proper hygiene. In Sierra Leone, CARE distributed 1,650 informational posters about Ebola prevention in the districts of Kambia, Tonkolili, Bombali and Koinadugu. Last month CARE began advising staff with family connections to affected areas to suspend visits to and from affected areas. Additionally CARE is following government health advisories to introduce preventative hygiene practices in CARE offices.

CARE Hilton A day in the life of Sungudota Daniel

Findings from the Learning Tour to Sierra Leone and Côte d’Ivoire. From May 28-June 4, a group of House and Senate congressional staffers, technical experts and a media representative, traveled with CARE, and learned about the importance of U.S. investments in maternal and child health to promote better health outcomes for women and youth in West Africa.

There are an estimated 1.5 million people living with HIV in Malawi and the Democratic Republic of Congo (DRC), with prevalence rates of nearly 11% and 1%, respectively. Through the Livelihoods and Food Security Technical Assistance II (LIFT II) project, CARE works to expand access to economic opportunities for people living with HIV and their families, and in doing so helps to improve food security and financial status, so that they are able to obtain life-saving healthcare.

Findings from the CARE Learning Tour to Cambodia

Access to education about contraceptive methods and tools empowers women and men to plan their families, educate their children, and...

CARE works with communities to improve the quality and accessibility of local health services for women and newborns.

CARE's Life Saving Interventions for Women and Girls in Haiti project has worked to protect earthquake-affected women and girls.