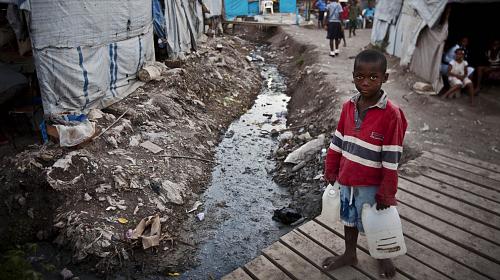 PORT-AU-PRINCE (January 10, 2013) – Three years after a deadly earthquake devastated Haiti, a web of political gridlock, donor fatigue and chaotic property laws continues to stall rebuilding in one of the world’s poorest countries. But the humanitarian organization CARE is working to remove another, oft-overlooked barrier lack of participation by women as a way to strengthen recovery efforts and build a better foundation for the future.

“Whether you’re talking about creating homes, jobs or reliable local sources of food, the reconstruction of Haiti isn’t sustainable if women and girls aren’t fully integrated into the process,” says Jean Michel Vigreux, country director of CARE in Haiti. “In fact, they hold the key to turning things around.”

Women, for instance, account for more than 80 percent of the nearly 5,000 people participating in CARE’s Village Savings and Loans Associations (VSLA) program. Started in November 2011, the VSLA program is designed to reach 300,000 people within five years. Participants come together in groups of about 30 people to save and loan each other money, allowing members to start small businesses, save up for home construction or make other investments. And unlike many microfinance models, CARE’s savings-led approach does not involve outside loans.

Women, who often have no access to the formal banking system, have used small loans to launch businesses selling food, school uniforms, household products and beauty supplies. Many report that, for the first time, they have access to savings that earn interest and loans from sources other than loan sharks, who charge 100 percent interest rates.

CARE also is working with USAID to assure vulnerable women don’t slip through the cracks. In June, CARE launched a 5-year program to help Haitians strengthen their own institutions and community efforts that protect women and girls from domestic violence and abuse.

Basic housing remains a major challenge in Haiti’s capital, however. Some 350,000 people still live in 496 camps scattered around the city. CARE has taken a new approach to reducing those numbers in the capital’s Carrefour area, offering to repair houses for homeowners who are willing to host a camp family for one year rent free. To support long-term change in urban development, only neighborhood “bosses,” or construction workers, are used. Each must be trained following the Haitian Ministry of Public Works post-earthquake building code standards.

In the wake of the Jan. 12, 2010 earthquake, CARE made a five-year, $100 million commitment to help Haitians rebuild their lives and communities, with a special focus on women and girls because they were disproportionately affected. CAREs emergency response team delivered lifesaving food, water, shelter and other vital services to 290,000 Haitians. CARE also built 2,550 transitional shelters to house roughly 13,400 people and built and rehabilitated 2,500 latrines and showers.

Even so, slow progress in Haiti’s overall recovery effort has led to “donor fatigue” from governments and individual people. The disaster-prone country has suffered through no less than three hurricanes since the 2010 earthquake. The most recent, Hurricane Sandy, destroyed 42 percent of Haiti’s corn, 30 percent of its rice and 20 percent of its bean crop.

“That has left more than 2 million Haitians vulnerable to immediate food insecurity,” Vigreux warns. “Unfortunately, another potential crisis looms for Haiti in 2013.”

Read CARE’s 3-Year Report on the Earthquake in Haiti>