Rep. McCollum and policy makers travel with CARE to South Sudan and Tanzania 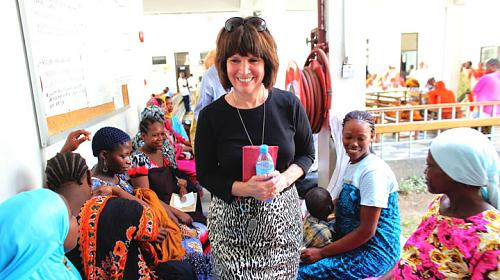 WASHINGTON, D.C. (February 21, 2013) – Rep. Betty McCollum, D-Minn., and several policy makers traveled with the global poverty-fighting organization CARE on a Learning Tour to South Sudan and Tanzania to better understand the challenges and solutions to food security and nutrition in each country.

In addition to government officials and policy makers, Robert Dreyfuss, a contributing editor at The Nation and Mike Davis, Senior Vice President of Global Human Resources at General Mills, Inc., came on the trip.

Presently, the two countries sit at two different stages of development: While South Sudan is one of the newest countries in the world still recovering from years of conflict; Tanzania has often been viewed as a center of political stability in Africa. Both countries struggle with high rates of malnutrition for women and children under the age of five.

The trip began in Juba, South Sudan where the delegation met with high-level government officials to discuss current food and nutrition initiatives in the country. Through conversations with program participants and locals, the group gained a deeper understanding of the difficulty to accessing food for the people of South Sudan. The country has faced seasonal food shortages and unpredictable markets, and a lack of food security in South Sudan has been a significant contributor to nutrition problems.

Next, the delegation traveled south to a farm in Yei County, South Sudan, which produces several crops including maize and sorghum. The group spoke to farmers about more efficient farming techniques and technology they have adopted to increase agricultural productivity. The farmers are participants in the Food, Agribusiness and Rural Markets (FARM) Project funded by United States Agency for International Development (USAID). In the long run, the project hopes to spur commercial small-holder agriculture in the area.

After two days, the delegation departed to Tanzania, where the countrys political stability, sound macroeconomic management and considerable resources have contributed to potential for sustained growth. However, the country still faces challenges in addressing its poor malnutrition rates where eighty percent of the population works in the agriculture industry.

The group began their visit by meeting with agriculture investors to learn about public and private sector investments in agribusiness in the region. Then, the delegation also saw investments in action at the local level: They visited CARE’s Village Savings and Loans program and met a group of women and men, who formed their own savings group.

These member-managed groups offer basic financial services to people who are excluded from the formal financial services system.  Every group receives one year of intensive financial literacy training to make sure they understand how savings, interest, profit and loss, and financial bookkeeping work. They also learn about the selection and management of income generating activities.  For many of the group members, they have invested in farming techniques that have protected them from food shortages and other shocks.

Another highlight of the trip was a visit to Africares Mwanzo Bora program, which helps pregnant women and children by teaching them new farming techniques and providing nutrition advice. The five-year program aims to reduce the prevalence of stunting among children and maternal anemia among pregnant women.

The knowledge gained from this trip will help participants and CARE continue to advocate for support and funding for these initiatives in South Sudan, Tanzania and throughout the developing world. Click here for more information on CARE Learning Tours. CARE Learning Tours are funded by the Bill & Melinda Gates Foundation.