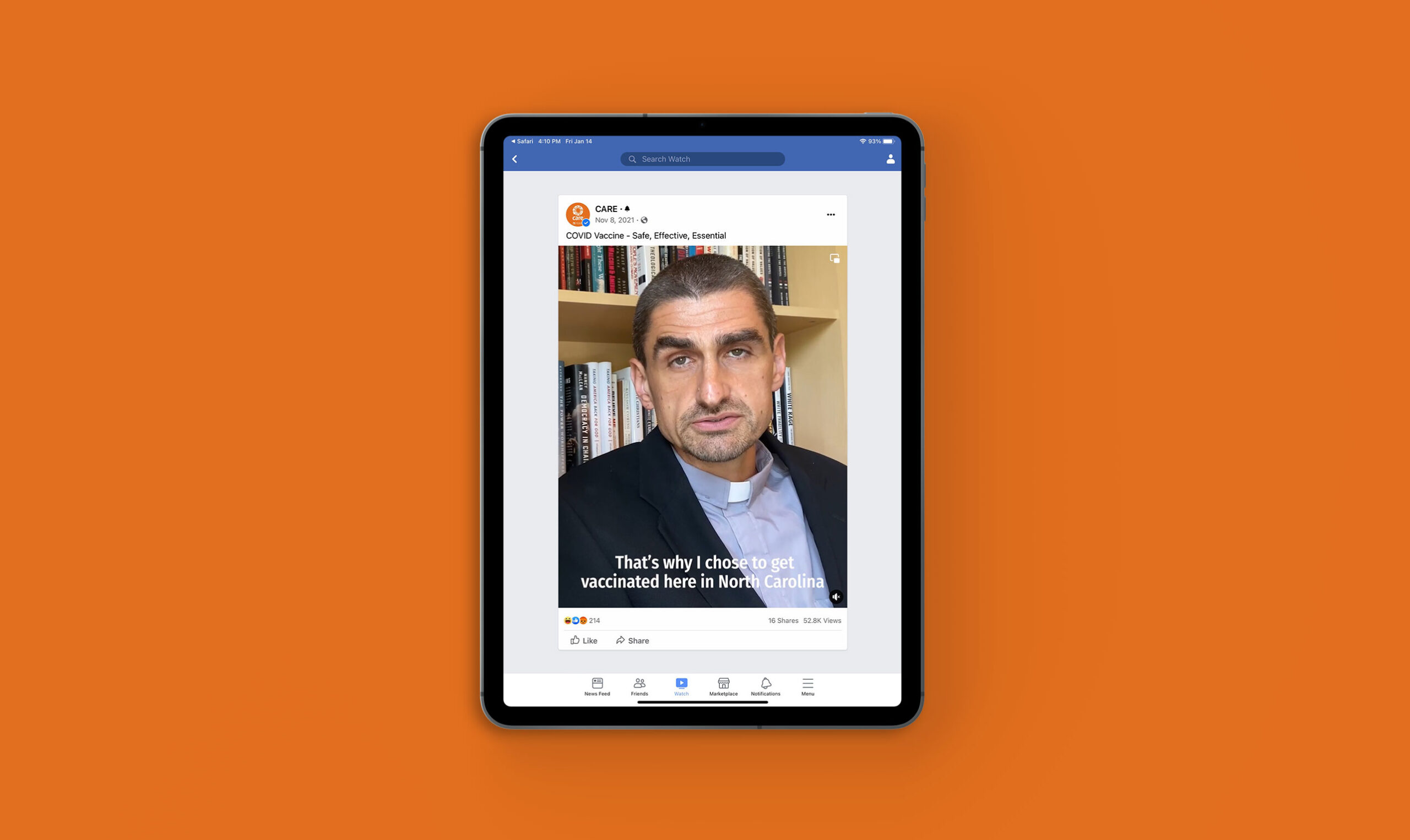 In July of 2021, through a partnership with Meta, formerly Facebook, CARE ran a social and behavioral change communications campaign on the Facebook platform designed to try to reduce COVID-19 vaccine hesitancy and to test which type of messenger would drive the greatest change in belief that the vaccines were safe and effective.

During this campaign, CARE ran ads on Facebook and Instagram featuring medical professionals, celebrities, and faith-based leaders. We were surprised to find that the faith-based leaders outperformed both medical professionals and celebrities in driving a change in perception that the vaccine was safe and getting vaccinated was important. We wondered if we could double down on the effort to reach more people and change more minds.

CARE re-ran the campaign in states where it originally ran and added 12 additional states. Sadly, we couldn’t reproduce the results we achieved in the first run. As we concluded at the time,

“It’s difficult to know for certain why the campaign underperformed in the second round.

Was it because we had already reached those that could be converted by these messages the first time?

Was it because something had shifted in the public mindset related to the vaccine in the weeks between the two campaign runs?”

We wondered if we should explore the intersection of faith and vaccine hesitancy and add messengers that represented the faith of those most hesitant. With the help of Meta’s faith team, CARE reached out to evangelical faith leaders to see if they would record a pro-vaccine message that could be tested against the original ad set. We were lucky to secure the participation of Jonathan Wilson Hartgrove, an evangelical Christian leader.

CARE ran Jonathan Wilson Hartgrove’s ad in a campaign with the top performing faith ads from the previous campaign runs to see if an evangelical faith leader would outperform the previous ad set. The call to action was to click through to a CARE.org vaccination page and from there, on to a CDC vaccine finder page.

CARE used Meta lookalike audiences to target “conservatives” and right size the audience to maximize reach and frequency. The target audience was selected based on hesitancy data available at CIVIQS and geo data available via Carnegie Melon.

For this campaign, CARE thought about how to further use geographic data to reach the target audience so we turned to the IHME Covid Collaborative website. What we liked about the IHME data set was that it measured intent – so it seemed one could target counties with the highest potential to have their minds changed regarding vaccination.

CARE exported the data, sorted by our target states and then by the percent of the potential for vaccine adoption in each zip code.  We further targeted our campaign to reach zip codes with the highest potential to be persuaded.

The campaign run including Jonathan Wilson Hartgrove’s ad reached 431,000 individuals at a frequency of 4x over the three weeks of the campaign run.

The click-through rate to the vaccine information page was 1.43% which was 619% higher than the earlier campaign. This is likely because we switched to optimizing traffic over reach.

Our CPM (cost per thousand) was $20, a 106% increase over the earlier campaign most likely due to this test running during the Thanksgiving holiday when Black Friday and the beginning of holiday shopping drove costs up. Fortunately, all ads were funded by a generous donation of ad credits from Meta.

The share rate was 0.019%, one of the highest, but flat compared to the earlier messenger test.

Compared to earlier faith campaign rerun, clicks to CARE’s vaccine registration page were up +55% and conversion was up +38%.

Males had significantly higher conversion rate of 6.2% compared to females who converted at 1.8%. This mirrored previous faith campaigns which also saw men convert at higher rates.

Clicks to CARE’s vaccine registration page were up +55%

Conversions on CARE’s vaccine registration page were up +38%

In measuring the vaccines effectiveness, CARE saw a 2.3% lift among men ages 25-34. In other words, the group of people who saw our campaign were statistically more likely to perceive the vaccines as important and effective after seeing our content compared to the control group that did not see it.

Using social media and specifically Meta as a tool to drive social and behavioral change is relatively new and we’re just learning what works and doesn’t work. Part of that learning is trial and error. Each set of results generates more questions. We are seeing different kinds of results for each measure of success with each campaign we run. In partnership with Meta, we’re actively trying to codify what we have learned as well as actively chase after answers to the new questions we’ve developed. You can see some of the best practices identified so far on Meta’s blog. Stay tuned here as we continue to post the results of our efforts and explore new questions. For example, until now, CARE has only run social and behavioral change campaigns related to the COVID vaccine on Meta. What might we learn if we test it as a tool to scale change in knowledge, attitude and behavior related to gender justice, climate, economic development, foreign aid, or poverty itself?

In July, CARE USA ran a series of Facebook ads featuring faith leaders. After the success of this campaign, CARE conducted two more experiments: a re-run of the ads in the same states with a more specific targeted audience, and an expansion of the campaign in 12 additional states.