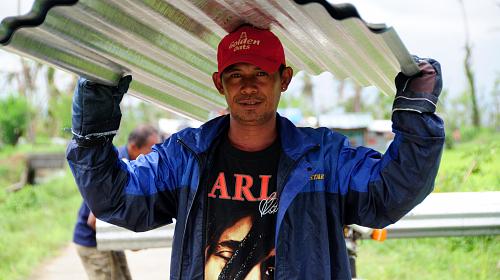 CARE is working with partners to deliver emergency relief in three areas of the Philippines: Leyte, Samar and Panay. Our target is to reach 200,000 people with lifesaving food, shelter, other assistance, and help communities recover in the months and years to come. So far, CARE has provided food to more than 88,000 people, and shelter materials (shelter kits and tarpaulins) and kitchen sets to more than 15,000 individuals.

“While we remain focused on providing lifesaving emergency relief, we know this is a country that faces many natural disasters,” says Lex Kassenberg, country director for CARE Philippines.

In addition to distributing high-quality shelter repair kits, CARE and our partners are working to empower families to repair and rebuild their homes stronger to face the next storm. This long-term approach involves training local carpenters and community members on improved building techniques to make homes sturdier, holding information sessions and having roving teams of local building experts available to offer helpful advice.

“CARE is committed to not only responding to Typhoon Haiyan’s aftermath, but helping communities be prepared for the next storm,” says Kassenberg. “The goal is to ensure lessons learned can be engaged the next time a cyclone or typhoon strikes.”

About CARE: CARE has worked in the Philippines since 1949, providing emergency relief when disaster strikes and helping communities prepare for disasters. CARE’s past responses in the Philippines have included Typhoon Bopha in 2012 and Typhoon Ketsana in 2009. Founded in 1945 with the creation of the CARE Package®, CARE is a leading humanitarian organization fighting global poverty. CARE has more than six decades of experience delivering emergency aid during times of crisis. Our emergency responses focus on the needs of the most vulnerable populations, particularly girls and women. Last year, CARE worked in 84 countries and reached more than 83 million people around the world.

Cash and Voucher Assistance During COVID-19

Guidelines and a tip sheet for adapting cash and voucher programming during COVID-19.

Lessons learned and program recommendations for COVID based on CARE's learning from previous epidemics.

A substantial body of evidence shows that giving vulnerable people money instead of in kind assistance allows them to meet a variety of needs while making aid budgets go further.

On 4 February 2016, the international community agreed on a ‘comprehensive new approach’ to address the protracted Syria crisis at the “Supporting Syria and the Region” Conference in London. Donors, and neighboring countries, which host the vast majority of those who have fed Syria, committed to significant financial pledges and policy changes to improve the lives of refugees and host communities. As the one-year mark of the conference approaches, 3 NGO platforms and 28 organizations have reviewed whether donors and host governments have fulfilled their commitments, and whether their actions have led to an improvement in the situation for refugees and host communities in the region.

In 2016, we saw numerous news-breaking humanitarian crises. Yet these headlines were just the tip of an ever-growing humanitarian iceberg. Underneath these more visible crises lay many more that never made it into the news. This report highlights where the global community must step up action to bring an end to human suffering and promote a world of peace and social justice.

CARE On Her Own refugee media report Sept 2016

A one-page factsheet showing the humanitarian needs of Yemen and how CARE is responding as of March 2016.

This executive summary analyzes the current economic and livelihoods challenges in conflict-affected communities in Southern Sudan.

This executive summary analyzes the current economic and livelihoods challenges in conflict-affected communities in Southern Sudan.

Lessons in peacebuilding and economic development in South Sudan.

A two-page report about CARE's response to the deadly earthquakes in Nepal in 2015.

Charting a New Course: Overcoming the Stalemate in Gaza

Factsheet: CARE’s Response to the 2004 Tsunami

Over the last five years, CARE has transitioned from post-earthquake emergency relief into programming aimed at addressing the underlying causes of poverty that increase vulnerability to disaster. Our efforts have focused on sustainable economic development, rebuilding of the urban fabric, improved education, and food security.

Five Years After The Haiti Earthquake:

One Year After Typhoon Haiyan

From Emergency Aid to "Build Back Safer"

Three Months After the Storm

CARE Haiti places strong emphasis on developing the principles of good governance in all its program sectors.