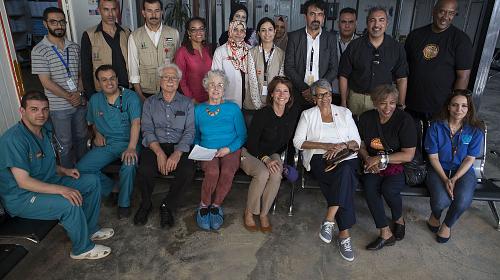 Congressional delegation from the U.S. travels with CARE to see impact of humanitarian assistance programs in Jordan.

WASHINGTON (July 10, 2017) – A delegation of policymakers and leaders from the public and private sectors traveled to Jordan with the global poverty-fighting organization CARE to see the positive reach and scope of U.S. investments and partnerships in Jordan. Of particular interest was the impact of humanitarian assistance programs and the long-term efforts designed to protect and empower displaced women and girls. As the conflict in the region becomes more protracted, U.S. efforts must go beyond humanitarian relief and emphasize programs that promote women’s empowerment and stronger livelihoods in order to support future peace and security in the region.

Today, Jordan is home to an estimated 1.4 million refugees, one of the largest populations of displaced people in the world, where a majority of refugees are women and children and more than half are under the age of 18.

On the first day of the trip, the delegation visited Zaatari Refugee Camp, the largest camp in Jordan, where more than 80,000 refugees from Syria reside. Here, the delegation saw a UNFPA health clinic, operating in partnership with the Jordan Health Aid Society (JHAS), that provides refugee mothers and families with critical health services and education, including safe delivery, counseling, sexual and reproductive health and gender-based violence care and support in reducing child marriages. Since UNFPA began working in the camp nearly three years ago, the health clinic has performed 7,000 safe deliveries, and despite the heightened risk of maternal mortality among refugees, the clinic has not seen a single maternal death since it began operations.

The delegation also explored the challenges facing refugees in an urban setting, where 80 percent of the Syrian refugees currently live. CARE responded to this need by starting its Urban Refugee Protection Program, which aims to enhance the resilience of all populations impacted by the conflict in Syria and Iraq. Critical to this program are the community centers, which are located in areas with the greatest concentrations of urban refugees in Jordan and offer a variety of targeted services, including psychosocial support, emergency cash assistance, education support, resilience and livelihood programs and more. The delegation saw firsthand how U.S. investments save lives and serve as a beacon of hope for vulnerable communities around the world.

“It was important to see the positive impacts that U.S. foreign assistance has on the health and well-being of families in refugee camps. Zaatari’s maternity clinic alone has safely delivered thousands of healthy babies, despite very difficult circumstances. This trip has reinforced my belief that the United States plays a vital role in assisting refugees and women around the world,” said Rep. Ami Bera (CA-07).

In addition to CARE and UNFPA, the delegation also met with partner organizations, including Mercy Corps, the Jordan River Foundation and the U.S. Mission.

Founded in 1945, CARE is a leading humanitarian organization fighting global poverty. CARE places special focus on working alongside poor girls and women because, equipped with the proper resources, they have the power to lift whole families and entire communities out of poverty. Last year, CARE worked in 94 countries and reached more than 80 million people around the world. To learn more, please visit www.care.org.