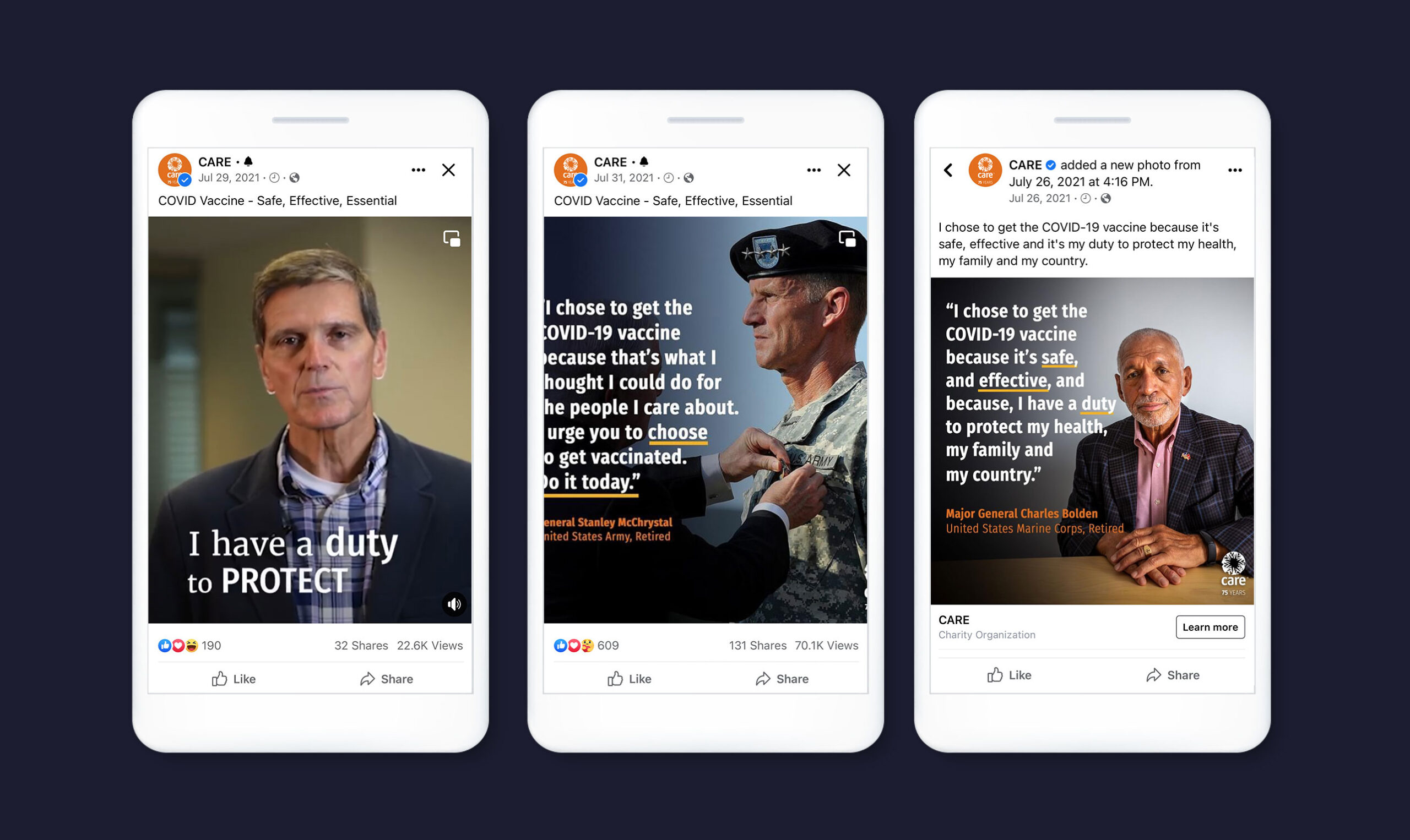 The TL;DR Summary of Our Latest Myth-Busting Campaign?

What do Veterans, women impacted by COVID-19, and emojis have in common? Nothing! That was exactly the point.

Throughout 2021 and through its partnership with Meta, formerly Facebook, CARE USA worked on decreasing vaccine hesitancy by designing and running social and behavioral change communications (SBCC) campaigns on Facebook and Instagram. Incorporating learnings from campaigns that ran during the first half of the year, CARE ran two social and behavioral change communications (SBCC) campaigns on social media, one featuring distinguished U.S. Veterans as trusted messengers and a second featuring content that dispelled common myths about the vaccines. We wanted to discover which approach would drive a higher increase in belief that the COVID vaccines were safe and that getting vaccinated was important.

From September to December 2021, the Delta variant was rampant and COVID cases continued to spike, particularly amongst unvaccinated populations. Despite Food and Drug Administration (FDA) approval of the Pfizer Vaccine on August 23, only 30% of the target audience for the SBCC campaign thought that the COVID vaccine was safe and that getting vaccinated was important. Therefore, we knew that our messaging and continued partnership with Meta was of the utmost importance.

The first test in this series launched September 2 and ran through October 4, 2021. It featured seven decorated Veterans: Admiral William H. McRaven, General Stanley A. McChrystal, Admiral Michael Mullen, General Joseph Votel, Major General Charles Bolden, Admiral Cecil Haney, and Captain Florent Groberg. Each Veteran’s ad included messaging about the safety and effectiveness of the COVID-19 vaccines and personal statements about why each of them chose to get the vaccine to protect their health, families, and country. The ads emphasized their choice to get vaccinated demonstrating values of freedom, liberty, strength, and duty – all themes that we anticipated would resonate with our target audience based on insights from the UNICEF Vaccine Messaging Guide.

The campaign included three creative approaches – long video (over one minute), short video (approximately thirty seconds) and a static image. In addition to testing a new type of trusted messenger, we wanted to understand whether a specific creative format drove more impact than another.

A couple of the videos

Using Meta’s ad targeting, these ads were served to politically conservative adults aged 18-49 in twelve states where vaccine hesitancy was highest at the time according to Carnegie Melon University’s COVIDcast Data. Targeted states included Alabama, Arkansas, Washington, District of Columbia, Florida, Georgia, Louisiana, Mississippi, North Carolina, Ohio, South Carolina, and Tennessee. Note that we excluded parts of Louisiana that were hardest hit by Hurricane Ida, which occurred at the onset of this campaign.

Using Meta’s brand lift tool, we surveyed audiences exposed and not exposed to the campaign to look for a difference in their attitudes. Because research shows that people’s knowledge, attitudes, and behaviors can be shifted by increasing their perception of social acceptance and norming, we hoped to see a 2-point lift or better with our audience, meaning that the people who saw the campaign were more likely – by two percentage points or more – to express positive attitudes toward the promoted behavior or question. Again, CARE’s target audience was vaccine hesitant 18–49-year-old adults.

Based on both the marketing and brand lift study results, we believe that a mix of static and short videos was a winning combination. We launched this campaign days after American troops exited Afghanistan and some of the featured Veterans were also in the news being interviewed on their point of view about the situation. We’re not sure whether the cultural context in this moment had a positive or negative effect on the performance of the ads. We know that cultural events certainly had an impact on the SBCC campaign in the Czech Republic.

It would be interesting to run Veterans as trusted messengers at another moment in time to see if performance changes occur.

In November, CARE focused on myth-busting. The tactic was one identified via social listening, particularly in other countries, to combat misinformation about COVID-19 vaccines and it seemed to be effective in driving online conversations. Would myth-busting work as an SBCC tactic?

A series of GIF ads were created that aimed to dispel the most talked about myths about the vaccine and its side effects.

A couple of the ads

Prior to launch, we ran a quick test using Meta’s A/B testing tool to determine the top creative for myth-busting ads. Of the original twenty ads designed and tested, CARE ran the eight top performers in the full campaign. These eight were separated into ads that included an image of a real person vs. ones that had a happy face emoji featuring a fact about the vaccine and a sad face emoji featuring a myth about the vaccine. We wondered if emojis, a now ubiquitous form of communication, would outperform images of people.

At the time, November 1 – 23, 2021, the climate around COVID remained similar to the previous campaign, with the addition of eligibility for children five years of age and older announced on November 2, 2021.

Interestingly, while the Emoji ads did not have strong recall, they slightly outperformed across click-through rate (CTR) and engagement.

In weak performing campaigns, we continue to see the diverging results between advertising and brand lift metrics. Across metrics, very few correlated. Ads featuring real people drove higher ad recall, yet Emoji ads drove stronger engagement (such as social shares). Conversion to click to register for a vaccine was flat between the two versions.

According to the health outcome questions in the brand lift study related to perception of the vaccine’s safety and importance, these ads did not show any lift. The Performance metrics were also poor with a CTR of 0.08%, a 43% decline vs. the Veterans campaign.

Compared to Veterans, landing page sessions were down 54% due to low CTR, clicks to register for a vaccine were up 186% and thus conversion rate (CVR) to register was +12% (2.3%). Curiously, men converted higher than women.

People visiting the landing page from these ads spent 57% less time on the page than those visiting from the Veterans ads. It is possible that those for whom these ads resonated were earlier in their vaccine planning process and still looking for research vs. being ready to register for a vaccine.

Overall, this campaign was a bust. We wondered if people interested in learning myth-busting facts were still too early in their behavioral change journey. And, despite doing our best to avoid reinforcing myths, we wondered if the existing campaign.

In our final campaign of 2021, CARE created ads featuring women who had been impacted by COVID-19 sharing personal stories. Originally, these were slated to run in August alongside the Veteran campaign ads; however, because many of the stories talked about the impact of COVID on individual families, we decided to run these ads in November, ahead of Thanksgiving and holiday travel, when we knew many would gather with their families. We hoped this timing would give these ads greater weight and driver more impact. And, we were right! See the results of one of our top performing SBCC campaigns here.

The Power of Authenticity in Social Behavioral Change Communications

Personal stories prove trustworthy when it comes to social media.