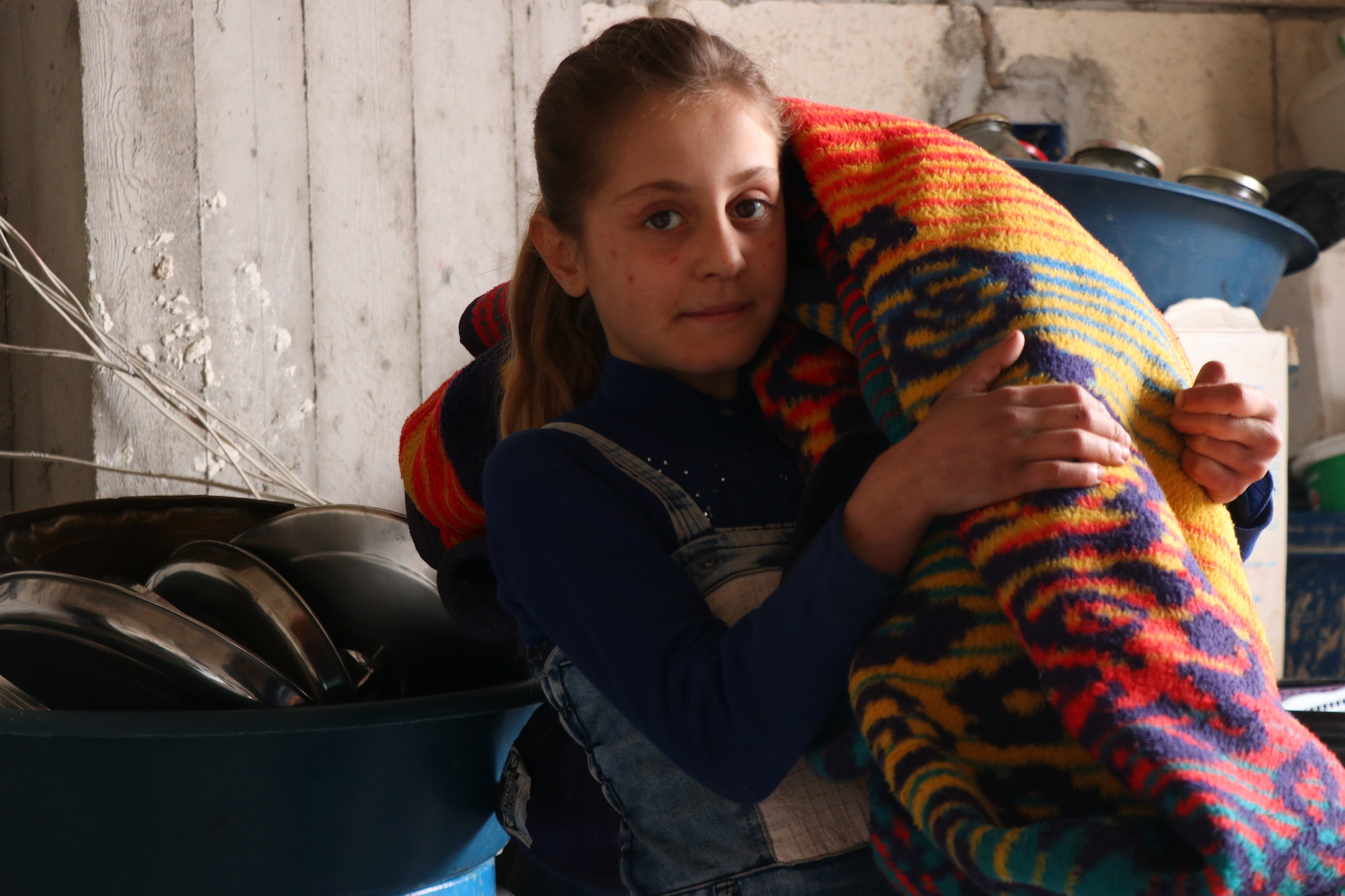 Almost a decade after the war in Syria began, the conflict has triggered the largest displacement crisis in the world. More than 5.6 million people have fled the country and 6.2 million Syrians are internally displaced in what the U.N. calls “unprecedented devastation” and a “man-made humanitarian nightmare.” At least 80 percent of those displaced in northwest Syria are women and children.

At the height of the conflict, an average of 150 Syrians were killed daily. Many Syrian hospitals and health care centers have been decimated. Amid the coronavirus pandemic, existing facilities are ill-equipped to respond to outbreaks.

“Nine years of conflict have left Syria in shambles,” says Nirvana Shawky, CARE’s Regional Director for the Middle East and North Africa. “With many health care professionals having either left the country or become displaced, providing sufficient medical assistance at scale is nearly impossible.”

There are currently over 16,000 confirmed COVID-19 cases and more than 160 deaths in northwest Syria, with new cases being registered every day. CARE is concerned that displacement camps will soon experience a spike in cases, given the crowded and dire living conditions in these camps. CARE’s concern also extends to the impact of COVID on health care workers, with almost 15% of all new cases being registered among doctors, nurses, and midwives.

“COVID-19 has compounded the immeasurable suffering experienced by displaced people, as a result of a 10-year-long war in Syria. CARE, our partners and many humanitarian actors working in northwest Syria are raising the alarm that the spread of the disease will soon outstrip our collective ability to curb its spread,” says Sherine Ibrahim, Country Director of CARE in Turkey.

“With winter at our doorstep, displaced people will naturally seek protection from the harsh cold weather, in overcrowded and ill-equipped tents, unfinished buildings, or reception centers. Hospitals continue to struggle to test, and provide medication and basic health needs for those who need it the most. There is an urgent need to provide shelter for some 2.7 million displaced people, to enhance testing capacity, and to support health facilities with medical supplies and equipment.”

Some areas of the country that had been temporarily spared fresh violence, are now seeing its return, with detrimental consequences on civilians, including aid workers, and civilian facilities.

“After more than nine years of crisis, vulnerable civilians living in Syria have already endured immense suffering. They must no longer be impacted by such horrific attacks,” said U.N. Resident Coordinator and Humanitarian Coordinator for Syria, Imran Riza, and Regional Humanitarian Coordinator for the Syria Crisis Muhannad Hadi. Earlier this year, U.N. Secretary-General António Guterres noted that the “potential for human suffering grows worse” in Syria.

In northwest Syria, the crisis requires urgent action. CARE calls on all parties to adhere to their obligations under International Humanitarian Law and to protect the lives of 3 million-plus civilians living in the area.

CARE has been working in Syria since 2014 and has reached more than 5 million people with emergency support including shelter, clean water, and health and sanitation services. Along with humanitarian partners, CARE also addresses hunger, helps rebuild livelihoods, and provides psychosocial and gender-based violence programming. 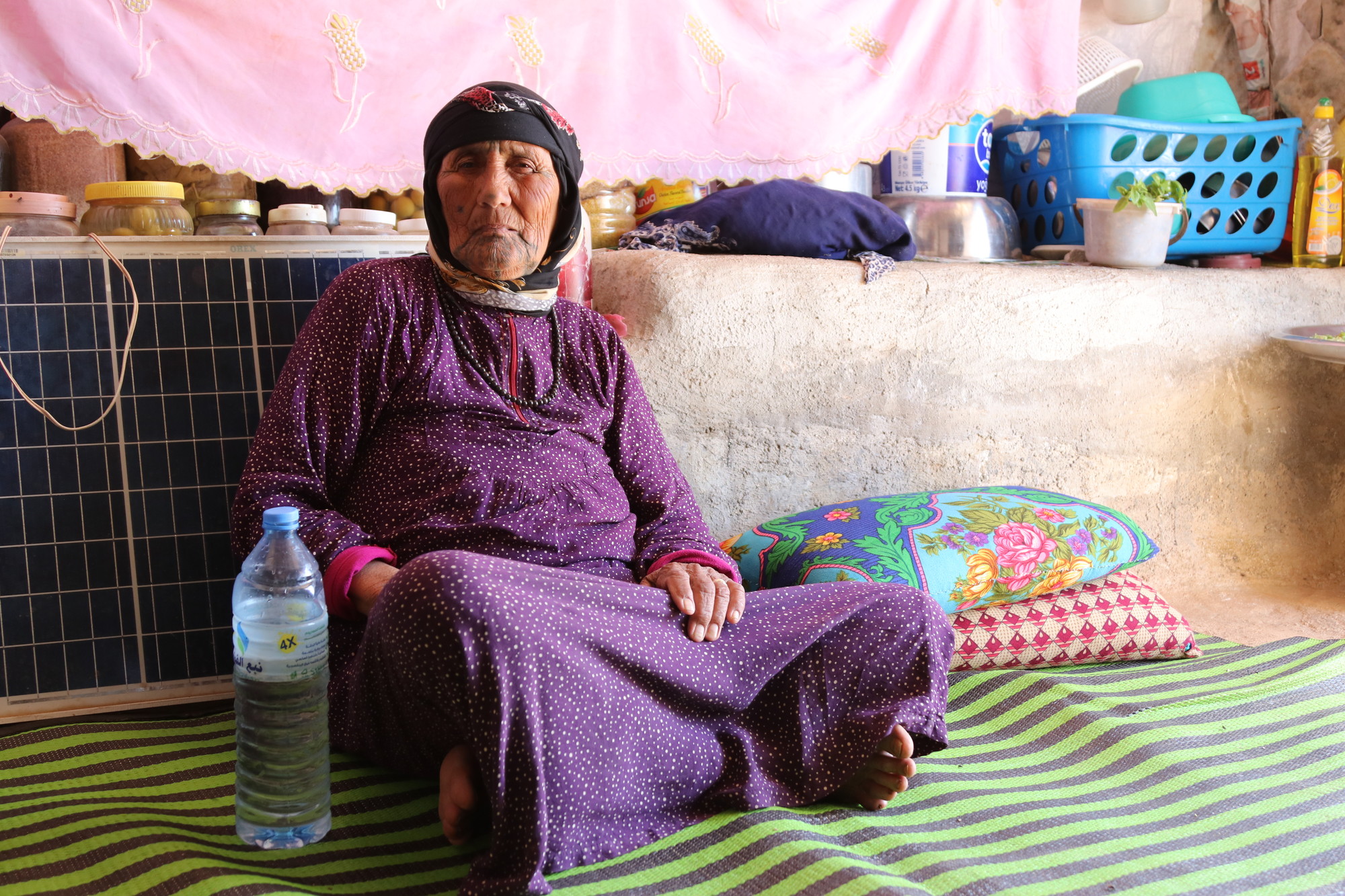 Soulafa*, 80, a widower and grandmother from Syria’s northern Hama countryside, remembers what life was like before the bombs: “We had lands where we grew vegetables, wheat, and cotton, and we had many wells … We lived a good life,” she says.

After her village was bombed eight years ago, Soulafa and her family fled to Turkey, but the cost of living was too high. Soulafa, who lives with a disability that limits her mobility, returned to Syria with her daughter. They now live in a tent in a camp for internally displaced people. Although her daughter works as a harvester, the money she makes is not enough to buy bread.

Soulafa dreams of returning to her land and being self-sufficient.

“Days pass when we do not eat,” she says. “We cry every day because of the situation that we live in and because of the memories of the beautiful homes we used to live in.” 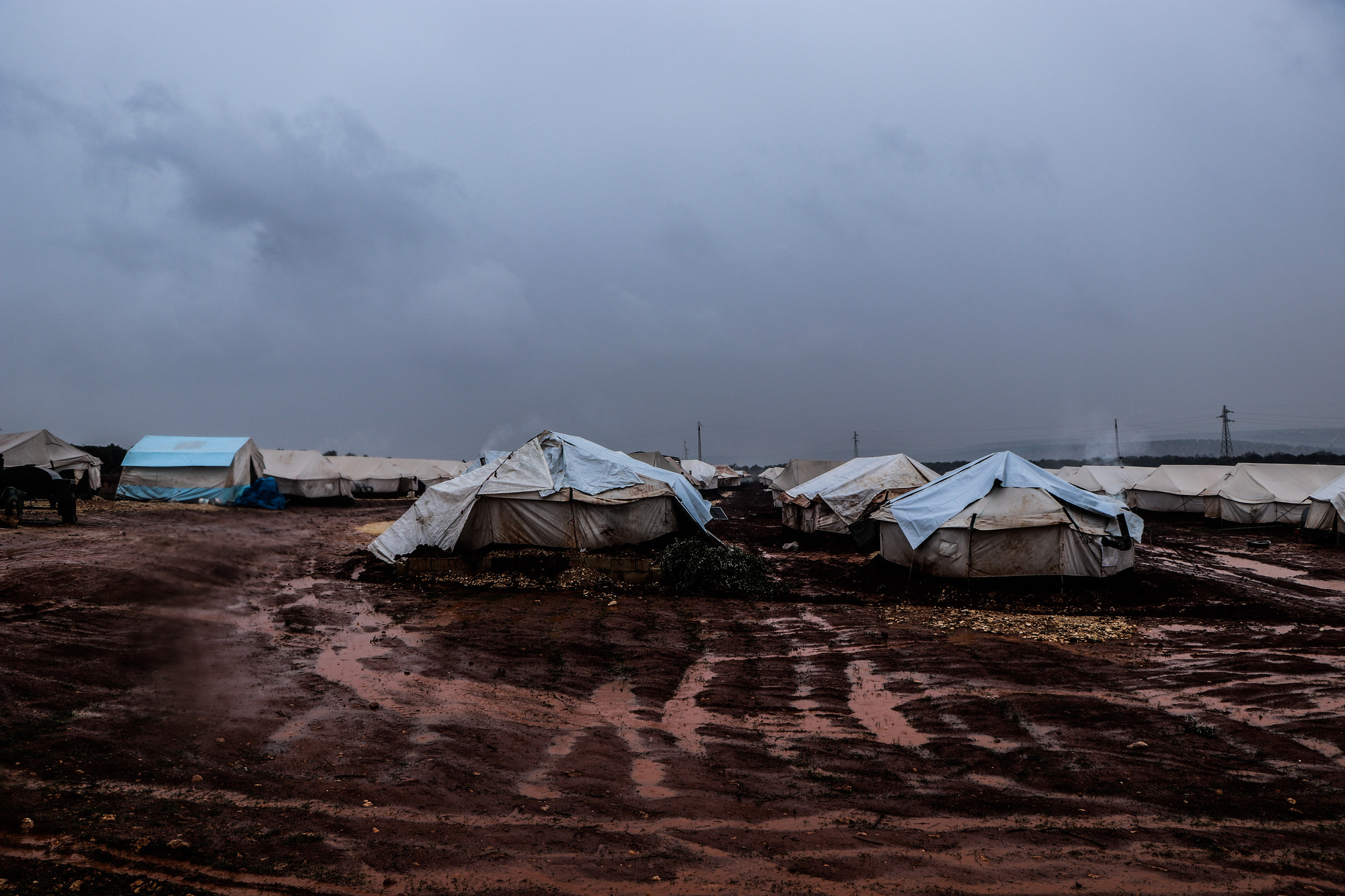 Photo by ©Ihsan Relief and Development/CARE

Of the 6.2 million Syrians who are internally displaced, 450,000 live in camps, sleeping in tents, unfinished or destroyed buildings, or even out in the open.

Winter conditions exacerbate the vulnerability of those affected by the conflict. In some parts of Idlib in northwestern Syria, temperatures can drop as low as 12 degrees Fahrenheit, making living conditions unbearable. The weather has contributed to dozens of deaths, including those of children.

Ahmad Yassin Leila’s 18-month-old daughter froze to death. “I just want my children to feel warm,” he told The New York Times. “I don’t want to lose them to the cold. I don’t want anything except a house with windows that keeps out the cold and the wind.” 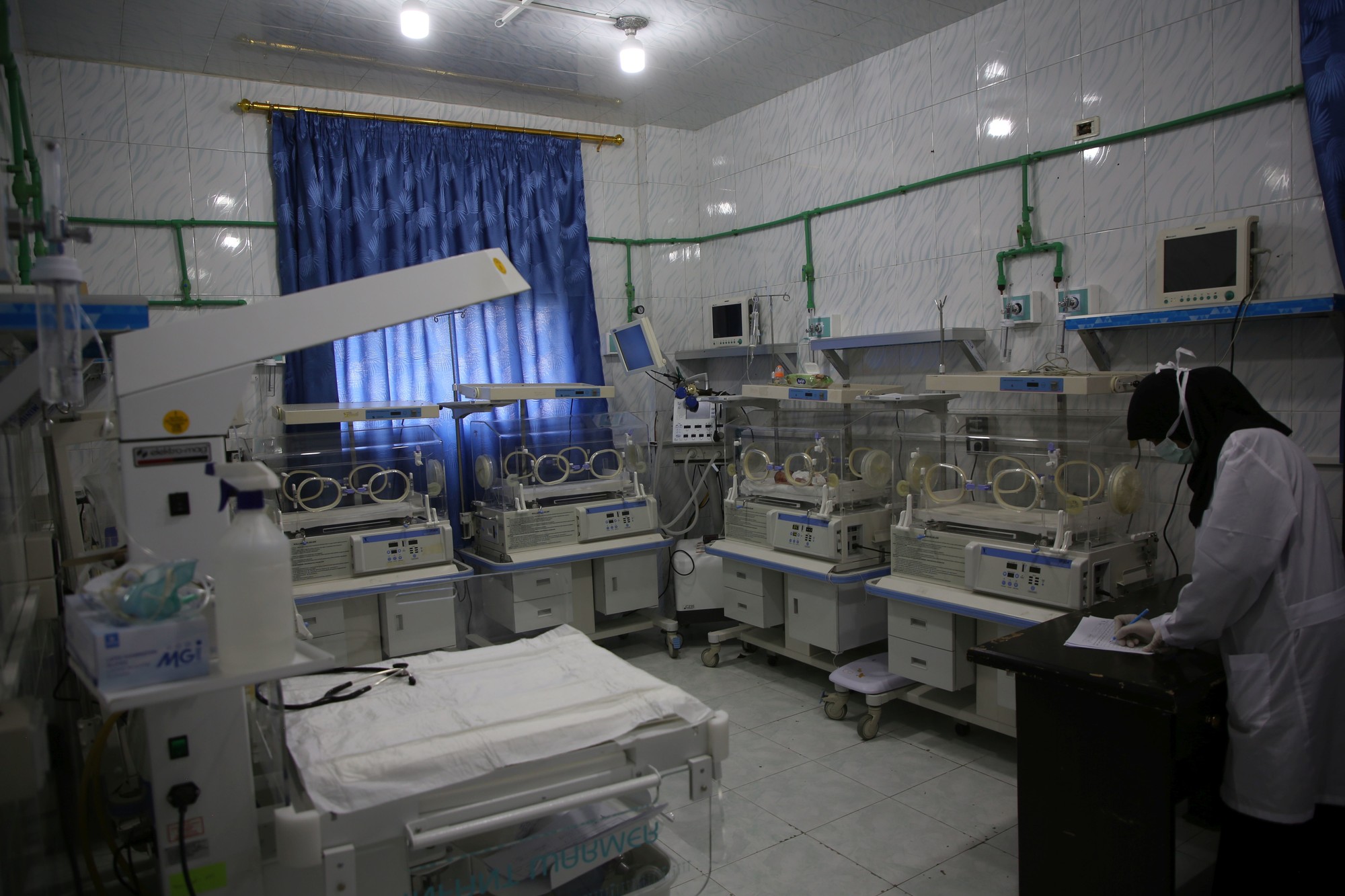 A nurse, surrounded by incubators, works at the CARE-supported Hope Maternity Hospital, known in Syria as Amal hospital.

After repeated air strikes earlier this year, CARE was forced to close the hospital and relocate it from Ariha city in Idlib to Azaz city in Aleppo. There were 85 attacks on health care facilities in northern Syria in 2019. The attacks have continued this year, with several more hospitals and health care centers across Idlib and Aleppo governorate reportedly shutting down, suspending their work or reducing operations due to the hostilities.

This hospital is one of the few maternal and pediatric facilities that remain fully operational. It provides life-saving interventions and is a glimmer of hope for the people of Idlib. 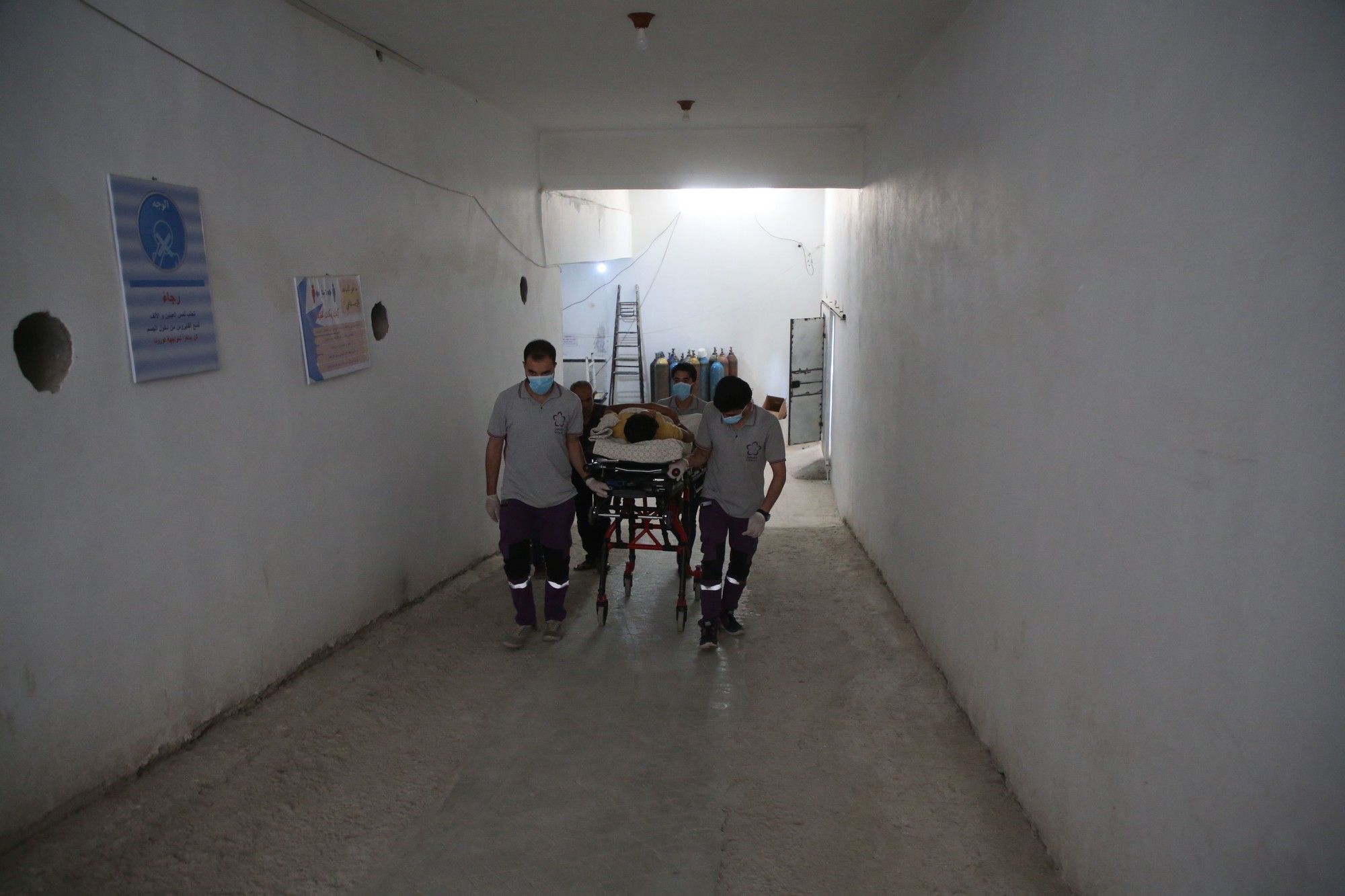 Medical personnel at the hospital discharge a patient.

As part of COVID-19 mitigation measures, triage and quarantine tents have been set up at the hospital’s entrance, and staff are equipped with personal protective equipment and digital thermometers. In response to the spread of the coronavirus, CARE is providing clean water and sanitation services in northwest Syria, where needs are immense and the health system is already fragile. 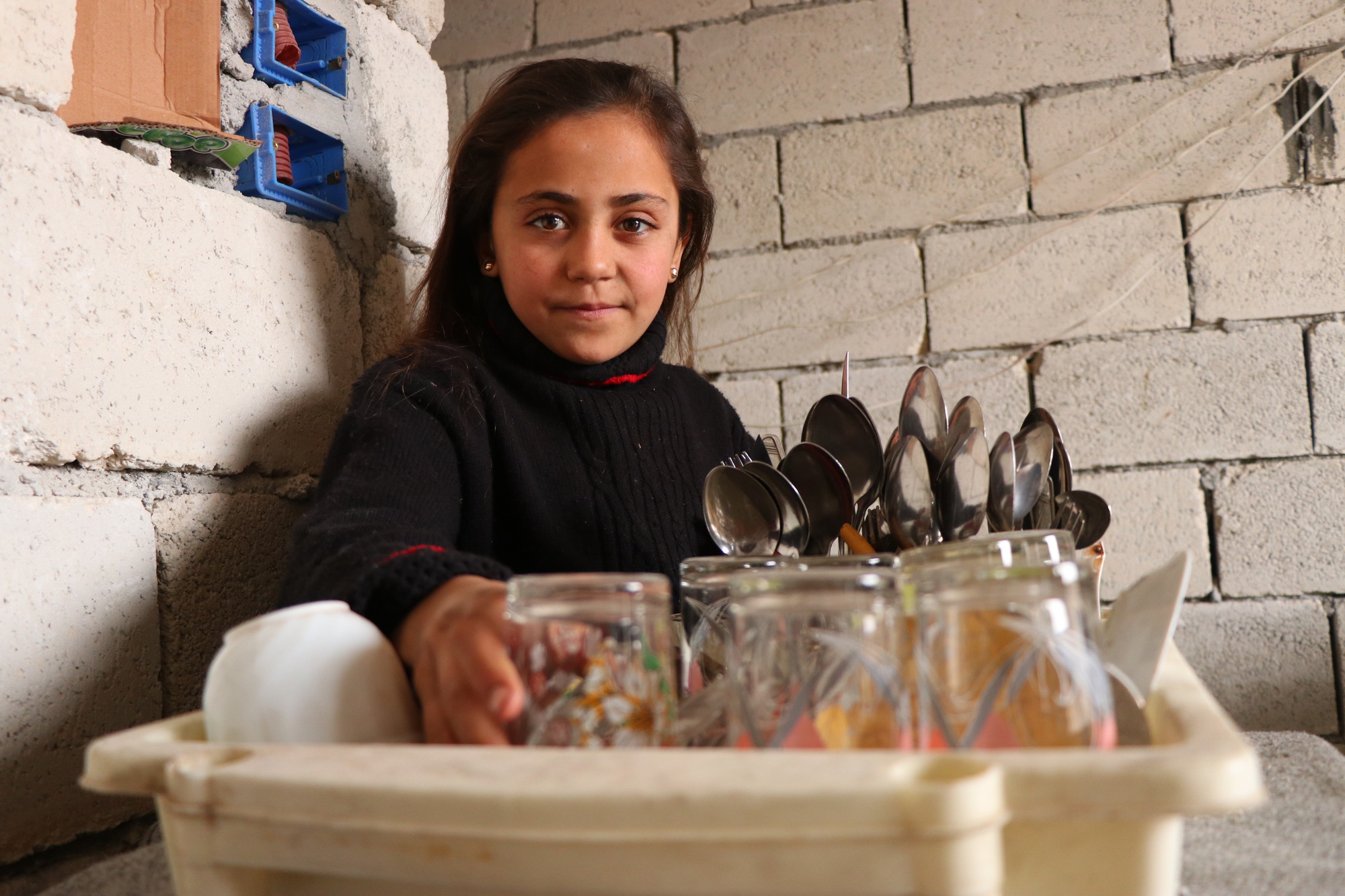 Lina* and her family are among those displaced by bombings in northwest Syria. She dreams of a large kitchen equipped with supplies.

Children like Lina are struggling to access education amid the conflict. Nearly 300 schools in Idlib and the countryside have reportedly been closed until further notice, impacting 160,000 students.

Together with partners, CARE is repairing the damaged homes of displaced families, to provide adequate shelter. 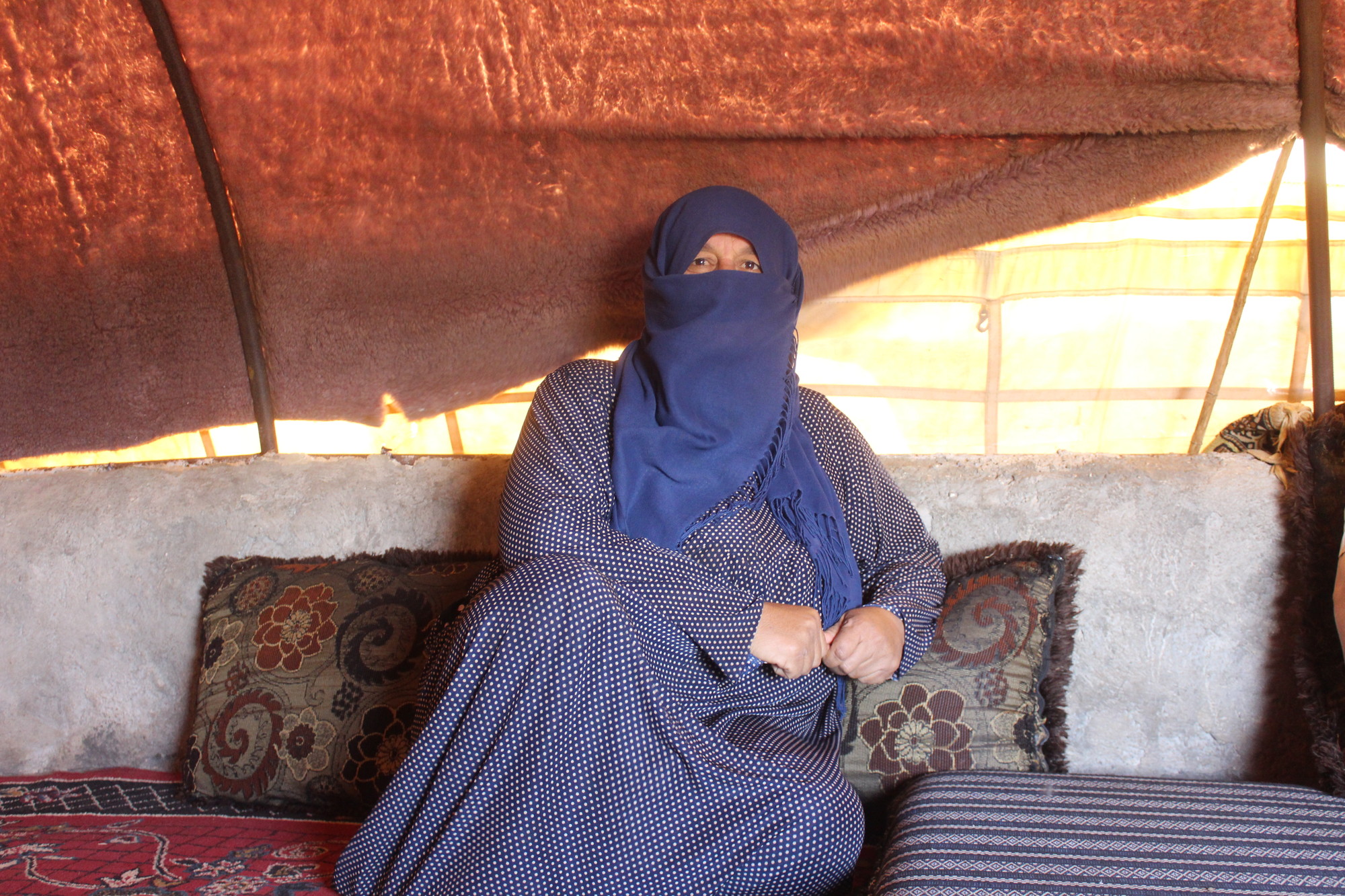 Jawhara*, 42, was forced to flee her village five years ago when bombing intensified. The widow and mother of five rode on a motorbike with her children to the nearby city of al-Bab with only the clothes on their backs.

The family was forced to relocate seven times before finally arriving at a camp for internally displaced people.

“When we came, we had nothing, but one night the other displaced people in the camp gathered some blankets for us, so that we could live in the tent.”

Although her son works in agriculture, he does not earn enough for the family to buy bread. Syria is experiencing the sharpest rise in inflation in its history, in what experts are calling a “looming economic implosion.” As the value of the Syrian pound has sharply devalued, families like Jawhara’s can no longer afford the basics. 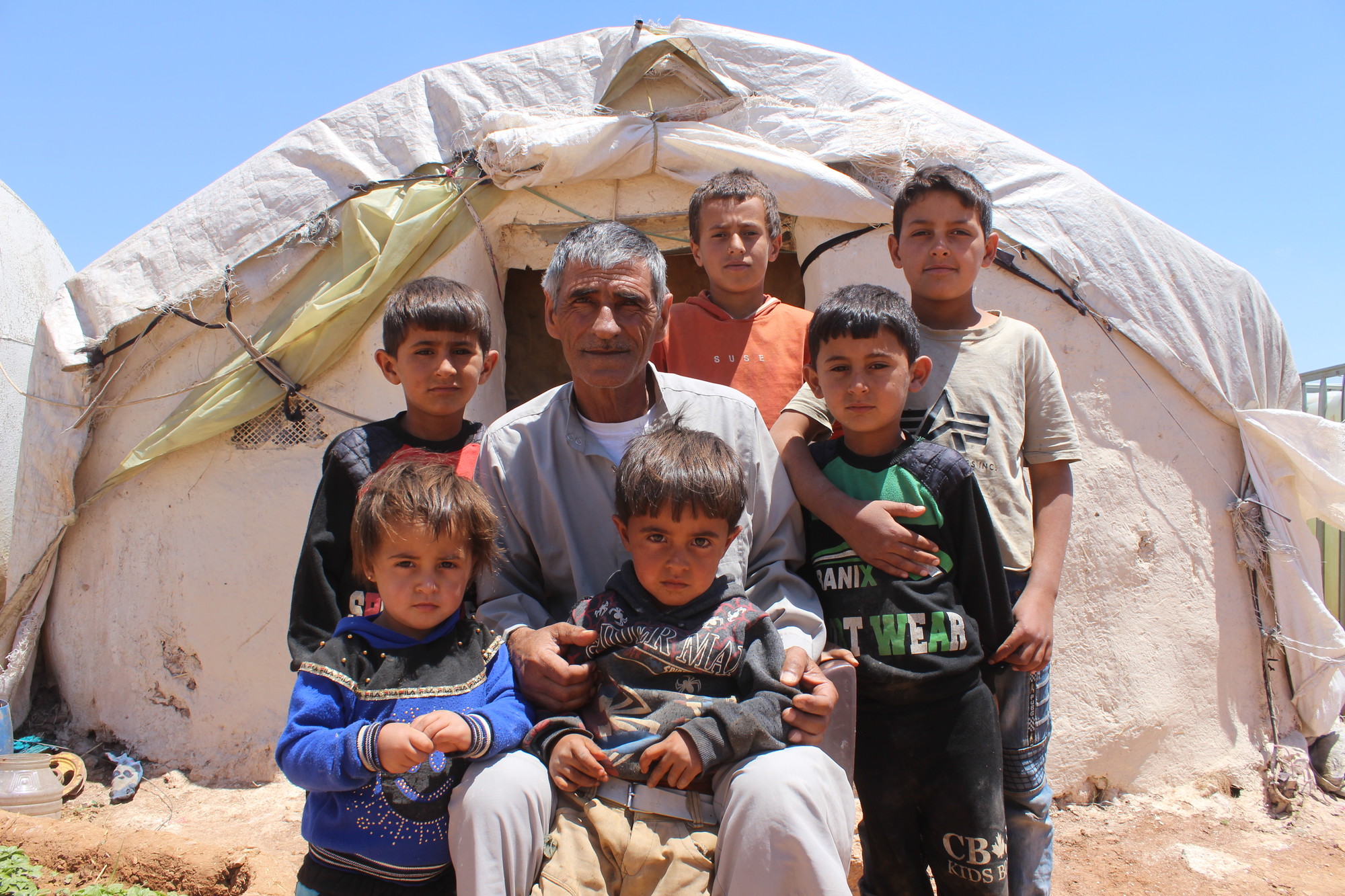 When aerial bombs began dropping in Abdullah’s* town of Deir Hafer in 2015, he had no choice but to flee. Abdullah, 55 and a farmer, helped his family escape to a nearby village on a tractor. The father of nine children — some his own and some adopted — lost one child during the displacement.

“At first we thought we would be able to quickly return so we went to a nearby village, but that was not the case,” he says. “With every displacement I have left more belongings behind.”

Abdullah and his family relocated to a camp and were provided with a tent. With the harsh winters and dusty summers, it quickly wore out, and so they built a stone and mud home, using the tent fabric as a roof.

When he first arrived in the camp, Abdullah worked as a vegetable seller, but camp residents were unable to afford his produce. His family sometimes goes to bed hungry, unable to afford bread. They rely on support from humanitarian organizations.

Abdullah has since lost his land, farming tools, and everything else he owned in Deir Hafer. “How I wish to return to my home. [I would] leave everything here behind and go back there.” 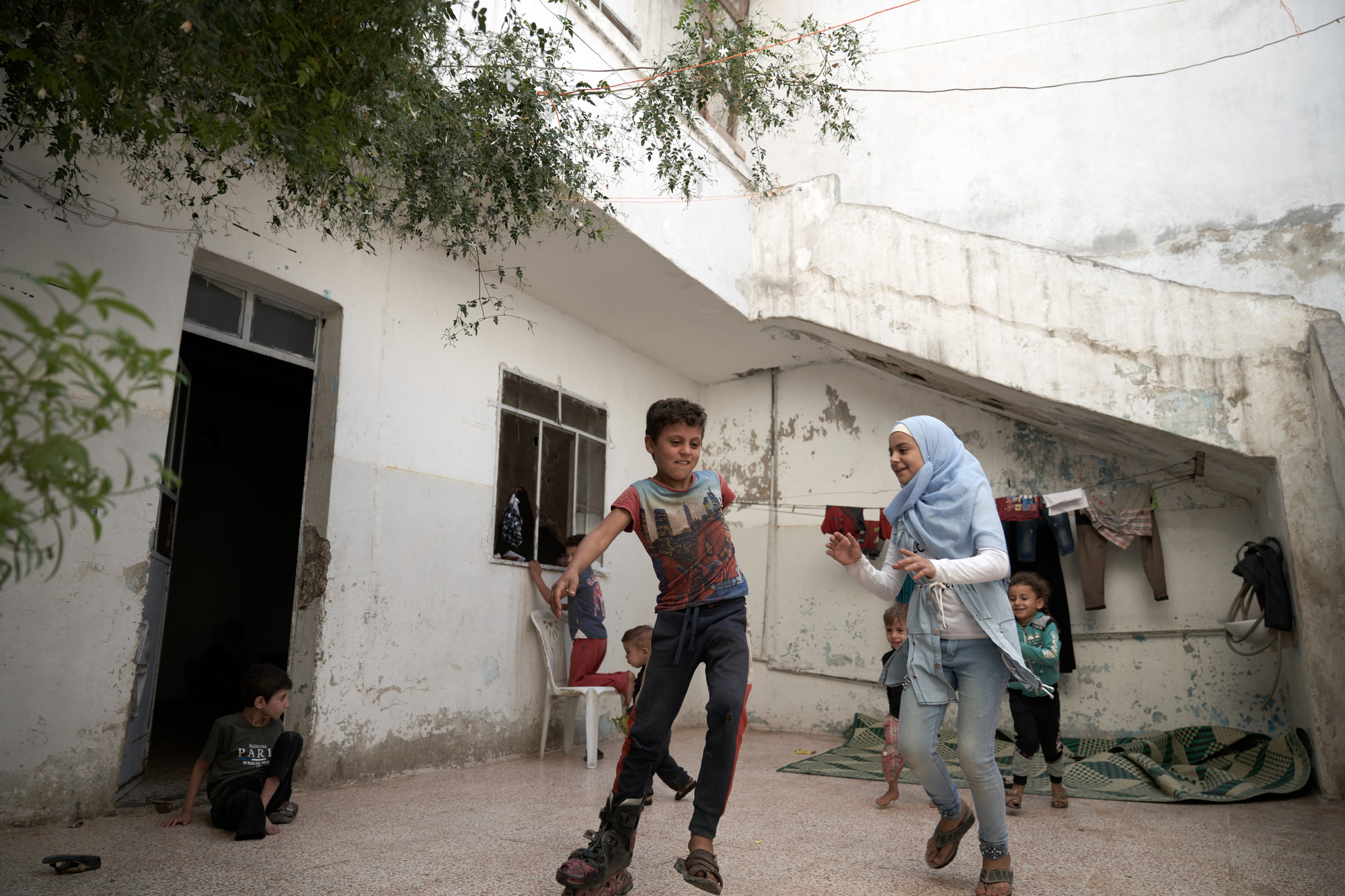 When Maram’s* father died and her mother remarried, she moved into her grandparent’s house. With a busy household of 22 children — all cousins and orphans — Maram, the eldest, stepped in to support her grandparents with household chores and caring for the younger children.

Although she enjoyed school, she dropped out because of the increasing duties at home. Shouldering major responsibilities, and coping with the death of her father and forced displacement, Maram experienced psychological distress.

CARE partner organization Shafak visited Maram, 10, at home and informed her grandparents of the importance of receiving an education and the link to psychological well-being. With their blessing, Maram returned to school and now helps her siblings and cousins with their schoolwork.

“Every day I study for a maximum of one or two hours. I do not have much time because I am the oldest girl in the house. I have to help my grandmother and take care of my brothers and cousins. I help them in their lessons and homework, and I also teach the younger ones the alphabet and writing,” Maram says. 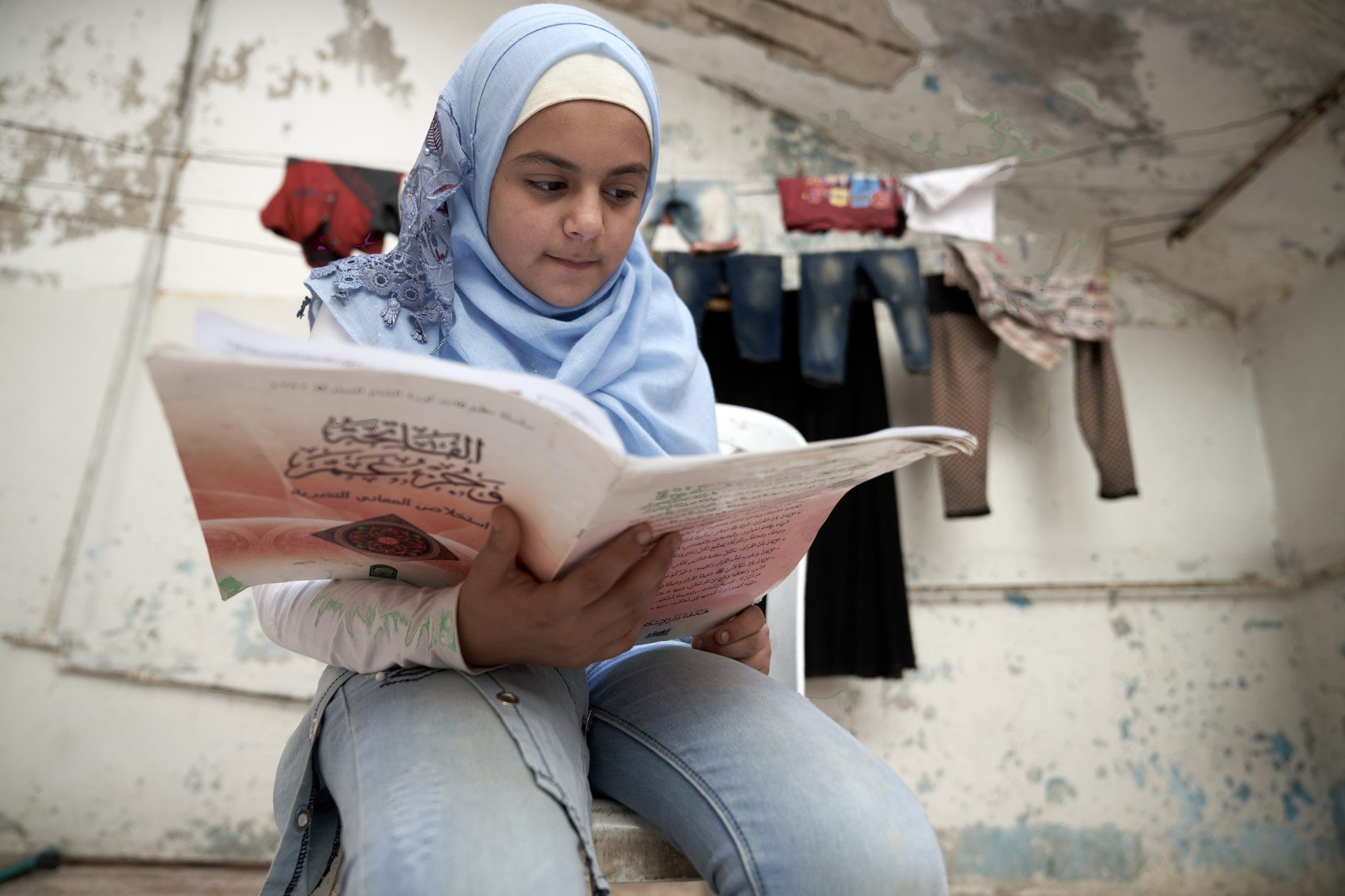 Due to the pandemic, Maram has stopped attending school in person, and has been learning remotely through social media apps on a mobile phone.

“I feel sad because I no longer meet my friends, whom I used to play with every day in the yard,” she says. “I want to tell my friends and all other children that school is important and that they should continue their education, whatever the circumstances.”

*Names have been changed

Amidst coronavirus pandemic, Syria ranks deadliest places to be an aid worker in 2020, for fourth year in a row

A devastating 74 aid workers have lost their lives since the beginning of this year. Read More

Amidst coronavirus pandemic, Syria ranks deadliest places to be an aid worker in 2020, for fourth year in a row

With support from her mother and teacher, Maya was able to address her fear and trauma and pursue her dream of becoming a doctor. Read More

In Syria, 10-year-old Maram is focused on staying in school and becoming a teacher

As the oldest girl in a household with 22 children, Maram is expected to balance the responsibilities of school and of being a caretaker for her young siblings and cousins. Read More

In Syria, 10-year-old Maram is focused on staying in school and becoming a teacher