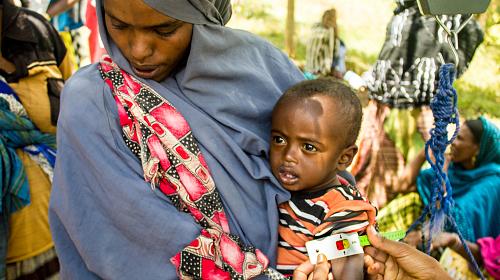 GENEVA (February 21, 2019) – Today the international aid organization CARE launched a new report highlighting the ten most under-reported humanitarian crises of 2018. CARE’s report aims to shine a rare spotlight on those humanitarian crises that have been neglected by the global public. Now in its third year of publishing, the report, called “Suffering In Silence”, found that the food crisis in Haiti received the least media attention globally. While the catastrophic Haiti earthquake in 2010 made global headlines, the food crisis in the Caribbean state in 2018 was largely overlooked and barely received international media coverage.

“We see more and more complex and chronic crises competing for public attention,” says Caroline Kende-Robb, CARE International’s Secretary General. “Media coverage has always been a strong driver of funding for crises as well as creating political pressure to protect those in need. With dwindling international coverage, under-reported crises are at risk of falling completely off the radar.”

With multiple emergencies within its borders, the East African nation of Ethiopia made the top ten of neglected crises twice: the country continues to face a complex food crisis, with ongoing food insecurity sometimes tipping over into acute hunger as well as a regional displacement with more than 1 million people forced to flee their homes in the regions of Gedeo and West Guji. In Madagascar, the number of people at risk of hunger increased to 1.3 million in southern regions due to unfavorable weather conditions. Other countries in crisis that ranked among the top ten list of CARE’s report include the Democratic Republic of Congo, Philippines, Chad, Niger, Central African Republic and Sudan.

Boosting coverage for forgotten crises cannot be the job of media alone but should be a joint effort, says CARE. “Media outlets, politicians, states and aid agencies need to join forces to find innovative ways to draw public attention to humanitarian needs,” adds Kende-Robb. “Given the challenges the media industry faces with shrinking funds, with coming under attacks that are undermining, and with limited access to some of the world’s worst humanitarian crises, we are all responsible for raising the voices of those affected.”

CARE calls on international media, policy makers and civil society to increase their efforts to speak about neglected humanitarian crises around the world. Increased funding and resources invested in reporting will not only result in better coverage of neglected crises but can, most importantly, help to bring urgent relief to those in need.

“Suffering In Silence” ranks the top ten crises which received the fewest media attention, meaning the least amount of online media coverage. This is the third time that CARE publishes the report “Suffering In Silence”. In 2018, the most under-reported crisis is Haiti, followed by Ethiopia and Madagascar. A year ago, in 2017, North Korea had been top of the ranking. This yearly analysis serves as a reminder and appeal to make room both in media and political debates for forgotten crises.